Intel has finally begun opening up about Kaby Lake, its next processor architecture and the first to break the traditional ‘tick tock’ cycle. Today, it was announced that the first Kaby Lake processors are going to show up in laptops this year, followed by desktop parts in January 2017.

We already had some indication that Kaby Lake desktop CPUs would show up early next year, rather than this year. However, we hadn’t heard much about Intel’s plans for tablets, laptops and 2-in-1 devices. 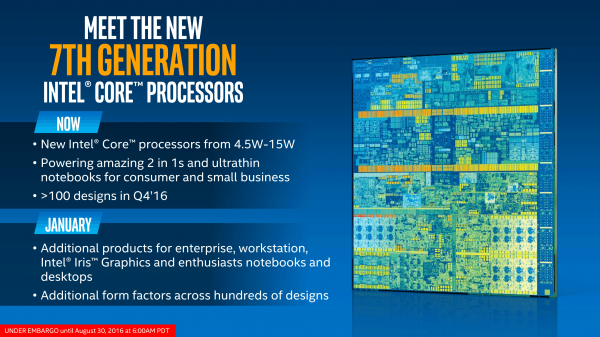 There will be three Kaby Lake Y-series chips coming out this year, with a tiny 4.5 watt TDP, making them ultra efficient for low-power portable devices like tablets. From there, we will also see some U-series CPUs release for standard laptops, these chips will have a higher 15 watt TDP. Overall, Kaby Lake’s new optimisations should bring along improved power efficiency and overall performance.

According to VentureBeat, Kaby Lake’s U-series processors will also be quite graphically capable, as Intel demoed one running Overwatch smoothly with the graphical settings cranked up.

If you are a desktop purist though, then you won’t be able to get your hands on Kaby Lake until January next year. We will likely hear more about these desktop CPUs closer to the time, alongside a slew of new motherboards.

KitGuru Says: Kaby Lake is making its debut this year it seems, though only on portable devices. Still, it will be interesting to see how much of an improvement we see over Skylake, particularly when the desktop chips launch in January. Are any of you waiting on new CPUs from Intel?