We have known about Microsoft’s holographic, augmented reality visor, the Hololens, for some time now but we did not know exactly what was powering it under the hood, until now. This week at the HotChips conference, Microsoft stripped down the Hololens for the first time, revealing the custom-built 24-core, 28nm processor running the show.

We already knew that the Hololens was a standalone unit and unlike many of the VR headsets we have today, it did not require any additional computing power. However, this is the first time Microsoft has gone into detail on the hardware. 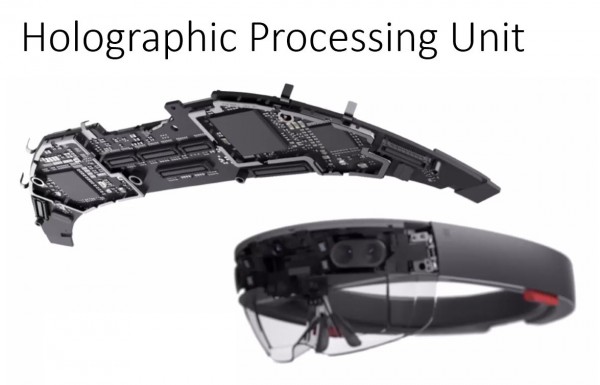 The processor is being dubbed as a ‘Holographic Processing Unit’ and it uses a custom 24-core design based on the 28 nanometer process. It has 65 million logic gates, 8MB of SRAM cache and a layer of 1GB of DDR3 RAM all in a tiny package. According to Cnet, the chip measures in at just 12mm by 12mm.

This unit handles all of tech inside of the Hololens, including not just the holographic elements being displayed on screen, but also things like gesture recognition, environment sensing and more.

Unfortunately, the Hololens is still a developer-only device for the time being. You could technically buy one if you wanted, but with a price tag of $3000, you should probably wait for the technology to flesh out if you want any real use out of it.

KitGuru Says: I do enjoy following all of Microsoft’s Hololens updates and that custom processor is certainly impressive given all of the work it has to do. Perhaps we will see devices like the Hololens become more common next year when Microsoft releases its Windows 10 Holographic update.

The Intel 12th Gen Core “Alder Lake” mobile CPU line-up has been leaked. From 5W to …