The Rampage IV Extreme Edition is going to find a home in many a high end enthusiast system, due to the ‘no compromises’ design ethic. The Republic Of Gamers products are a showcase range for ASUS and after using this for the last week we can see why. The UEFI bios is well engineered, cleanly organised and offers a wide array of processor tweaks to get the most from the machine.

In a similar fashion to the P9X79 Deluxe, the Digi Power section of the bios offers many settings to stabilise and improve power delivery, especially when the processor is right at the redline. We were only limited by our cooling solution today, achieving stable overclock results at 4.9ghz and 5.0ghz, even if the temperatures were a little high to feel totally safe 24/7. That said, 4.8ghz from an inexpensive ‘all in one’ liquid cooler is impressive and the subsequent results indicate performance levels previously unheard of.

Memory support is fantastic, and the cutting edge Corsair Dominator GTX8 operated at 2,400mhz without a hitch throughout our intensive test period.

The Rampage IV Extreme specification list is just as impressive as the P9X79 Deluxe board, while offering additional capabilities such as the LN2 switch for hardcore overclockers.

ASUS are releasing this product for £334.99, right at the top of their X79 range. It may be expensive, but if you have just spent over £800 on the new Core i7 3960X EE then we would assume that money is really not that big a concern. It is well worth the cost because it is the most impressive motherboard released today for the X79 platform.

Kitguru says: Another brilliant motherboard from the ASUS Republic Of Gamers team.

I use the X58 platform on a regular basis, between multi monitor work based environments and for bursts of gaming …. on the rare occasion that I manage to get some downtime that is. Intel’s 970, 980X and 990X have been personal favourites of mine now for some time, but X58 was long overdue a refresh. We can safely say that the Core i7 3960X Extreme Edition has rewritten the performance charts, even before we get to overclocking.

Intel are promoting the new X79 platform as a ‘master of all trades’, and we fail to find a valid argument against this. It can not only outperform any system on the market when it comes to gaming prowess, but for more serious duties such as 3D rendering and video encoding it is without question, in a class of its own.

While the Core architecture is both efficient and brutally powerful on a clock per core basis, the quad channel memory architecture is responsible for further enhancing the overall system performance. SiSoft Sandra gives an indication of almost 50 GB/s of bandwidth available from this 2,400 mhz Quad channel configuration, which is over twice the performance of the previous generation.

Overclocking the Core i7 3960X EE is relatively easy, with our sample needing a little more ‘Digi Power’ bios tuning after pushing past 4.7ghz. Intel supplied a reference sheet with their DX79SI motherboard which said it should only need around 1.44 volts to achieve 4.8ghz, but all processors will vary, even from within the same batch.

Achieving 4.7ghz with our sample only required 1.41 volts and we would probably run this CPU at that speed 24/7. It really will depend on your cooling solution, but there is definitely plenty of headroom in the right hands, even with a mainstream ‘all in one’ liquid cooler. In the hands of the hardcore overclockers we are sure that some crazy, yet stable 5.2ghz+ speeds will be possible.

AMD have unfortunately not released a solution to target this ultra high end enthusiast sector and we are left with the FX 8150 Black Edition, which in reality fails to even outclass Intel’s ‘mainstream high end’ Core i7 2600k or 2700k. That said, we were also surprised to see that the FX 8150 could actually demand more watts at the socket than this i7 3960X EE, depending on the settings.

UK pricing has not yet been confirmed for the i7 3960X Extreme Edition, but as we said earlier in the review, we would make an educated guess around £800 inc vat. Sure its expensive, but like the last generation 970, 980X and 990X this new chip redefines the ultra high end sector. A selection of the enthusiast audience will be willing to pay for this.

Kitguru says: If performance is your primary concern then the Core i7 3960X EE should be right at the top of your shortlist.

Corsair have supported our launch today by supplying several kits of high performance memory, but without question the Dominator GTX8 2,400mhz is the most impressive memory kit we have tested to date. After a few manual adjustments, and increasing the auto voltage to 1.65 – the Dominator GT worked flawlessly throughout all the tests, returning a bandwidth score of almost 50 GB/s and setting a new record in the process.

Additionally we noticed some gains when running Cinebench R11.5 64 bit and video encoding applications, which indicate that the extra bandwidth does further enhance the overall system performance of the X79 platform.

Kitguru says: If you want the best memory on the market today, then this should be right at the top of your shortlist. 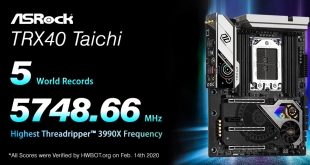