Since shipments of personal computers in the first quarter of the year dropped again both sequentially and annually, it is not surprising that sales of graphics adapters (both discrete and integrated) also contracted in the Q1 2014. Advanced Micro Devices suffered most from the declines and its overall share of the graphics adapters market dropped. GPU sales of Intel and Nvidia also decreased, but they either increased or maintained their market shares. 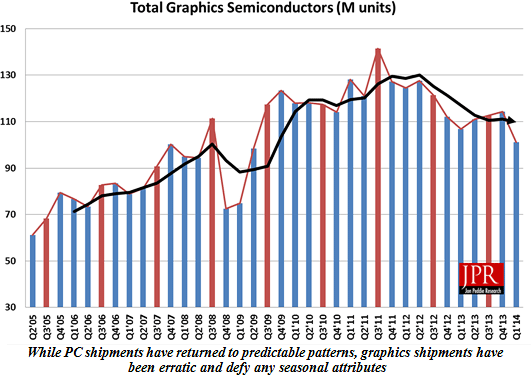 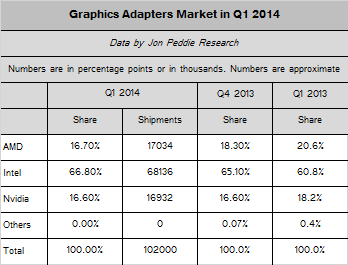 JPR claims that around 67 per cent of AMD’s microprocessors feature integrated graphics cores. The company continues to ship 880G/980G core-logic sets with integrated Radeon HD 4250 graphics engines (graphics adapters integrated into chipsets are also called IGPs [integrated graphics processors]), though their share is declining, claims Jon Peddie Research. The analysts believe that one of the reasons for AMD’s market share decline in Q1 2014 was a decrease of IGP sales.

In Q1 retailers traditionally minimize their purchases and to unload what they bought for the holiday season and what they did not sell. As a result, sales of PC companies in the first quarter are seasonably lower compared to other quarters. This year shipments of PCs and GPUs declined in Q1 as well, but the drop was not alarming, JPR claims.

KitGuru Says: The overall trend of the graphics adapters market resembles the general trajectory of the PC market, which is on a decline these days Therefore, the results of Q1 were not really surprising. What was rather unexpected is AMD’s shipments of chipsets with integrated graphics for outdated processors originally released in 2009 – 2011 timeframe. Sales of such low-end devices partly explains why AMD’s microprocessor and core-logic division cannot make money and suffers from low average selling prices.