A web-site has published what it claims to be the photo of Nvidia Corp.’s code-named GM206 graphics processing unit that will power the company’s forthcoming GeForce GTX 960 graphics adapter.

If the image published by VideoCardz web-site is a legitimate photo of Nvidia’s code-named GM206 graphics processing unit, then it confirms two things things. Firstly, Nvidia does have the GM206 chip at hands. Secondly, the chip is smaller than the GM204 and is designed for a different market segment. The GPU is marked as the “GM206-300-A1”, which means that this could be the first commercial revision of the graphics processor.

The new chip features slightly different packaging than the GM204 does, it does not have a protective metal frame (which points to the fact that the GPU does not require a massive cooling system). The exact size of the chip cannot be determined, but given the fact that it is rumoured to have a 128-bit memory bus and appropriate packaging, the chip should be rather small. Moreover, its rectangular form indicates that Nvidia wants to maximize the number of such chips on a wafer. 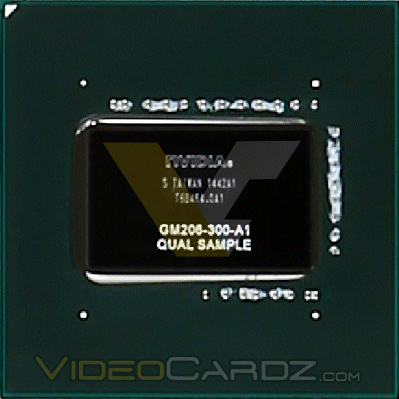 A cpecial design, decreased size, narrow memory bus, rectangular form and some other things indicate that Nvidia intends to maximally optimize manufacturing cost of the chip and graphics adapters on its base. This means that Nvidia has rather big plans for the GM206 GPU.

Low-cost graphics processors with high performance tend to become bestsellers among gamers. However, in the recent years all popular performance-mainstream graphics cards from both AMD and Nvidia featured 256-bit memory bus to maximize memory bandwidth and let the chips show their potential. Unfortunately, 256-bit memory bus also has a drawback: it requires higher amount of memory chips as well as a more expensive eight- or ten-layer printed circuit board (PCB). The usage of 128-bit memory bus indicates that Nvidia wants to be able to drop the price of the GM206-based graphics cards to very low price-points, which is why it needs a narrow memory bus to let its partners use low-cost PCBs. But will the GeForce GTX 960 perform really well with 128-bit memory?

KitGuru Says: While we can be sure now that the GM206 will be a rather low-cost graphics solution, we are not that sure that it will become truly popular on the market because of its performance. While it is possible to set a very low price and boast with price/performance ratio, gamers will not buy graphics cards that do not meet certain performance criteria. Therefore, it would be better for the GM206 to actually perform very well despite its narrow memory bus and potentially limited memory bandwidth.

Previous Dell’s new XPS 13 and XPS 15 revealed
Next Intel’s Curie, the tiny SoC that can