PowerColor has introduced the world’s first consumer-class graphics card with 16GB of onboard memory. The new adapter carries two AMD Radeon R9 390 “Hawaii” graphics processing units and will be one of the highest-performing graphics cards on the planet. Moreover, to emphasize that the new card is premium product, PowerColor bundles a free Razer mouse with it.

The new PowerColor Devil 13 Dual-Core R9 390 16GB is based on two AMD Radeon R9 390 “Hawaii” graphics processing units with 2560 stream processors, 164 texture units, 64 raster operations pipelines as well as 512-bit memory bus. The GPUs are clocked at 1000MHz and each chip is equipped with 8GB of onboard GDDR5 memory operating at 5400MHz.

The PowerColor Devil 13 Dual-Core R9 390 graphics board relies on a custom printed-circuit board with an advanced 15-phase voltage regulator module powered by an International Rectifier PowerIRstage IC [integrated circuit] and featuring solid-state ferrite-core chokes as well as high-end solid-state capacitors. The board uses a PLX PCI Express bridge and features four 8-pin PCIe power connectors, which can deliver a total of 600W of power to the board (in addition to 75W supplied by the PCIe x16 slot).

The new Devil 13 graphics card is equipped with a triple-slot cooling system that features numerous heat-pipes as well as a large aluminum radiator and three high-end fans. The PowerColor Devil 13 Dual Core R9 390 has LED backlighting that glows a bright red color, pulsating slowly on the Devil 13 logo.

Enormous power draw, sophisticated VRM and the large cooling system should help the graphics adapter to demonstrate unprecedented overclocking potential for a dual-GPU board. 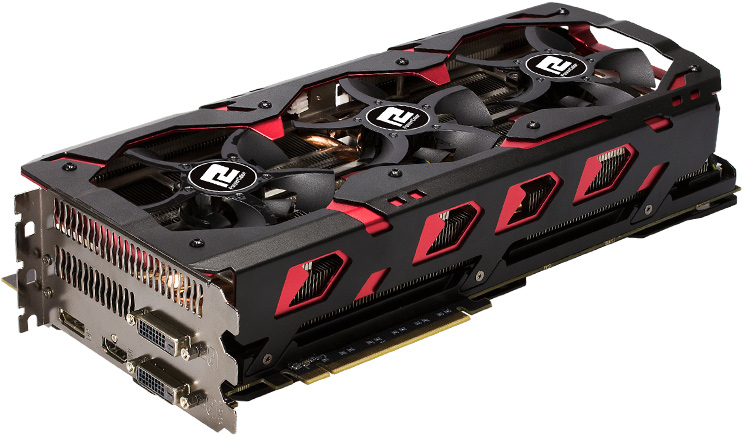 The graphics card has peak compute performance of 10.24TFLOPS, far above any single-chip graphics solutions available today. Still, keeping in mind that the dual-chip PowerColor Devil 13 Dual-Core R9 390 relies on AMD CrossFire multi-GPU technology that supports many, but not all games, performance of the adapter depends on AMD’s drivers. In some games, the novelty will behave like a single-chip AMD Radeon R9 290 graphics board.

The “Hawaii” (aka “Grenada”) graphics chip is based on the GCN 1.1 architecture and while it is rather powerful, it does not support numerous latest technologies that AMD’s latest “Fiji” processors offers. Nonetheless, the GPU fully supports DirectX 12, OpenGL 4.5, OpenCL 2.1, Vulkan and Mantle application programming interfaces along with various modern features. AMD originally introduced its “Hawaii” in late 2013. 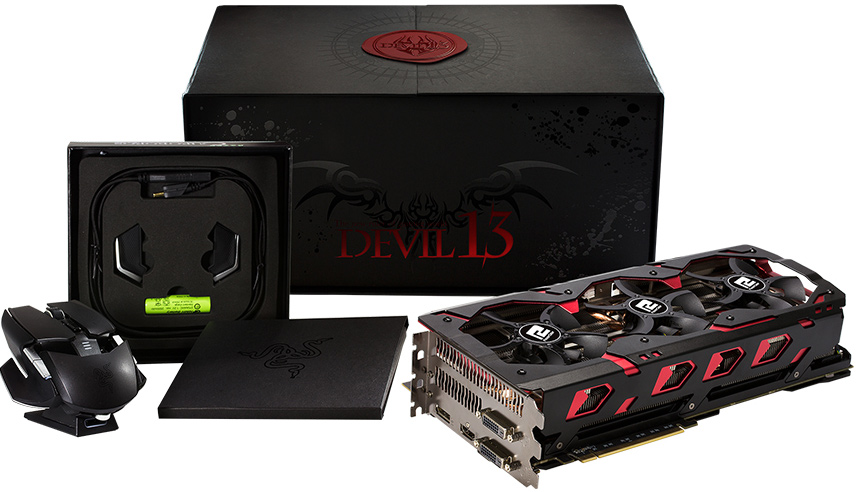 To emphasize that the PowerColor Devil 13 Dual Core R9 390 was designed for demanding gamers, the manufacturer bundles free wireless Razer Ouroboros mouse with 8200dpi sensor with it. The mouse costs $149/€149/£129.

The PowerColor Devil 13 Dual Core R9 390 will be available starting from the 17th of September for €699.

KitGuru Says: It is completely unclear why PowerColor decided not to use fully-fledged “Hawaii” graphics processing units on the world’s first consumer 16GB graphics adapter. Without any doubts, the Devil 13 Dual Core R9 390 is one of the most powerful graphics cards ever built, but it could have been even more powerful. On the other hand, for €699 the card looks rather good, especially considering the fact that it comes with a Razer Ouroboros mouse. Nonetheless, keep in mind that there is Radeon R9 Fury X2 incoming, which will offer considerably higher performance…