The graphics card uses sophisticated printed-circuit board for a reason. Nvidia’s GM200-310 graphics processor on the Zotac GeForce GTX 980 Ti AMP Extreme Edition is clocked at 1253MHz/1355MHz (base/boost), the highest out-of-the-box clock-rates of any GeForce GTX 980 Ti graphics adapter to date. Moreover, Zotac decided to further improve performance of its product and overclocked memory of the card to 7220MHz, something that none of Nvidia’s partners has done to a flagship graphics adapter.

The board requires two 8-pin PCI Express power connectors and can consume up to 375W of power. To cool down the world’s highest-performing GeForce GTX 980 Ti graphics card, Zotac uses triple-slot/triple-fan IceStorm cooling system. The monstrous cooler is equipped with LED lights in order to appeal to modders. 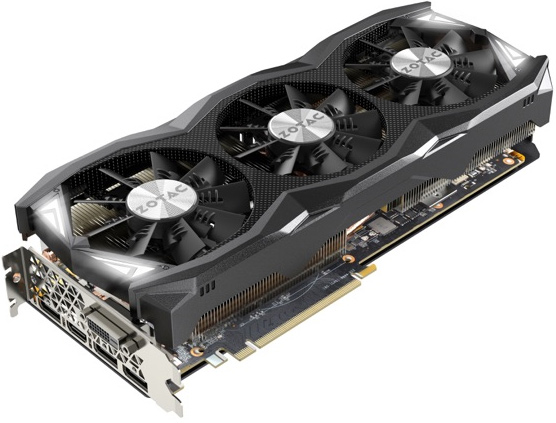 Zotac first demonstrated its GeForce GTX 980 Ti AMP Extreme Edition at Computex last month. Right now, the graphics card is available for sale at Overclockers UK for £599 for a limited amount of time. In the U.S. the board is available at Newegg for $699. Considering the fact that the product promises to outperform considerably more expensive GeForce GTX Titan X in almost all cases, its price does not seem excessive.

KitGuru Says: It is interesting to note that while end-users can overclock memory on their Nvidia GeForce GTX graphics adapters, suppliers of add-in-cards are not allowed to boost clock-rates of GDDR5 DRAM on their products. Memory controllers of Nvidia’s GM204 and GM200 graphics processors can handle clock-rates of 8GHz and higher, there are memory chips from Samsung and SK Hynix that can officially operate at 8GHz. It is a complete mystery why Nvidia does not use such chips and also does not allow its partners to utilize them and/or overclock memory on their GeForce GTX products. It is unknown how Zotac managed to convince Nvidia to let it overclock GDDR5 on its card and whether other manufacturers follow Zotac.