Those of you waiting for AMD’s next big GPU reveal will be happy to hear that the company has announced a new graphics card is launching this year. However, this will not be the high-end consumer desktop card previously referred to as the ‘Nvidia Killer' but a GPU for the professional market.

AMD is launching the new Radeon Pro W5700 graphics card that will be primarily focused on professionals in the design area and will provide high-end performance in applications such as 2D/3D CAD and to a lesser extent in digital media, software development and scientific research. AMD says there is a gap in the market for high-end users which the Radeon Pro W5700 will fill.

The AMD Radeon Pro W5700 is the world’s first 7nm PCIe Gen 4 professional workstation graphics card optimised for today's design workflows and is built on AMD’s RDNA architecture, which is found in its current generation of consumer desktop products. 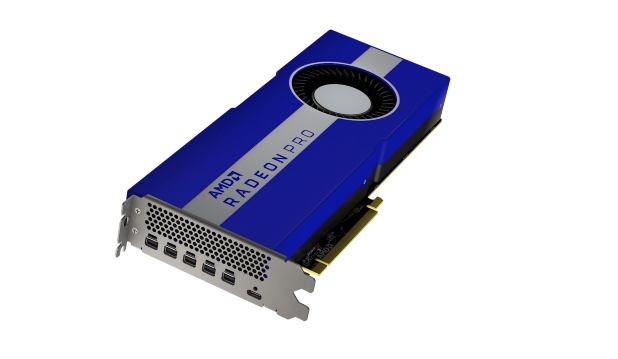 AMD claims the Radeon Pro W5700 is the company’s most efficient professional GPU by offering up to 41% higher performance per watt than previous AMD GCN architecture cards when tested in applications such as SPECviewperf 13, Enscape and Unity Automotive Benchmark. In addition, the Radeon Pro W5700 is expected to provide up to 18% better system efficiency with intelligent power usage when compared with the Nvidia Quadro RTX 4000.

AMD plans to release quarterly software updates throughout 2020 for the Radeon Pro W5700. The card will support features such as AMD Remote Workstation meaning users can continue working on projects started in the office later at home or on the move. Radeon Pro also supports AMD Radeon ReLive for VR, allowing professionals to wirelessly visualise projects using VR headsets such as the HTC Vive Focus Plus. On release, the AMD Radeon Pro W5700 will be priced at $799 USD.

Previous Nvidia kicks off holiday sale season with deals on GPUs, laptops, monitors and more
Next Light up your entire desktop with the Corsair iCUE LS100 Smart Lighting Strips