Today we look back on a review from last month where we tested three GPU water blocks for RTX 30-series reference cards. In that review, we tested using a Zotac RTX 3080 Trinity OC to compare the performance of water block offerings from EKWB, Alphacool and Corsair. The results threw up some interesting figures, so Corsair sent us two more samples of the XG7 to see if our findings changed.

The original review concluded that the best overall GPU water block on the day was the EK-Quantum Vector. The Alphacool block had some issues with VRAM temperature, which the company is looking into, and the Corsair XG7 looked pretty average across the board in terms of the thermal performance.

While testing the new Corsair XG7 samples, we also thought it was a good time to take a look at EKWB's new Active Backplate for RTX 30 reference design cards. These active backplates were supposed to be included in the original review but samples were not ready in time.

To ensure testing is fair and accurate, the same test bench as in the original review is used during the retest. Testing is conducted in the same test room as before and the ambient temperature is between 18⁰C-20⁰C, which is the same as before.

A new terminal block replaces the original and links the water block and active backplate together, meaning that the whole enclosure requires just one inlet and outlet, eliminating additional tubing and clutter.

A simple custom loop was constructed and equipped with a 360mm radiator, triple 120mm fans and a 120mm pump/res combo that was connected to each water block individually during testing. GPU temperature and frequency were recorded during each test using GPU-Z and averages calculated for analysis.

For the first series of tests, a custom fan curve was configured to replicate the fan speed of the stock Zotac cooler. As the GPU core temperature increases, so do the fan speed of the 360mm radiator fans, which forms part of the cooling loop. This allowed us to compare water block performance against the stock cooler.

The 3DMark Time Spy Extreme stress test was then run in a loop 30 times, which lasts approximately 30 minutes, allowing the graphics card to reach its steady-state temperature. The board power limit was set to 105%. Average GPU core temperature, VRAM temperature and GPU frequency were calculated to measure performance.

A second run of the Time Spy stress test 30x loop followed, but with the GPU and VRAM overlocked (GPU core +140MHz, VRAM + 500MHz) to see how this impacted temperature and frequency. The same measurements were taken and plotted in the charts below.

To measure the three water blocks performance against each other under controlled conditions, the fan speed was then set to a fixed 1300RPM which also normalised noise levels. By using the 3DMark Port Royal stress test in a loop 30 times, we could measure GPU core temperature, VRAM temperature and frequency again and analyse the results to see which water block provided the optimal thermal performance and frequency. 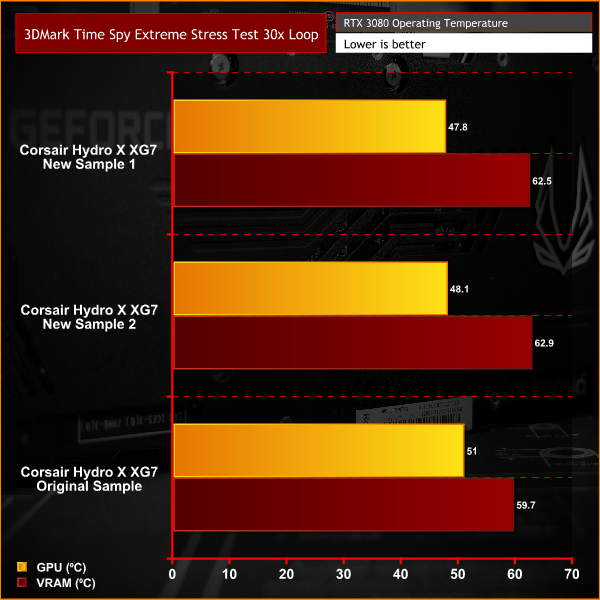 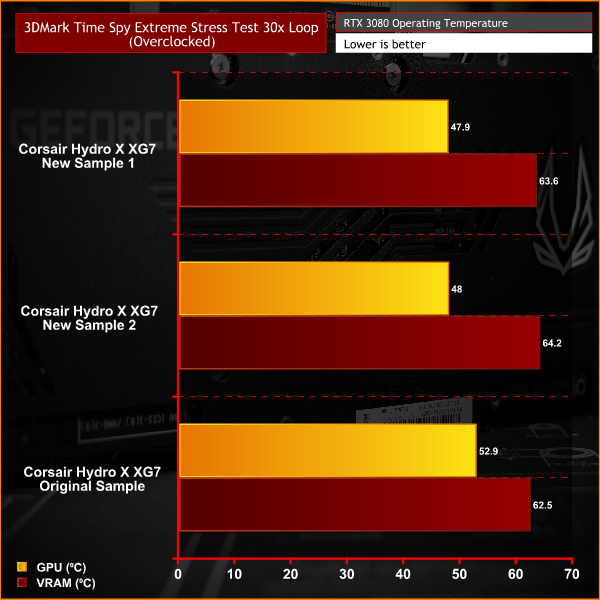 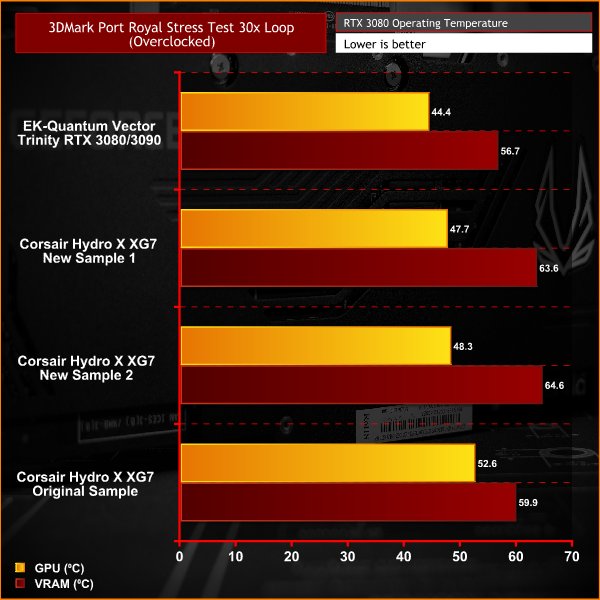 Both of the new XG7 samples produce an improvement in thermal performance during all three tests. New sample 1 is marginally the better out of the two but this new test data brings the XG7 closer to the EKWB water block compared with the sample from our original review.

This could mean that either the original sample was bad, but still within Corsair tolerance, or that since we received the original sample (a very early production sample) Corsair could have refined the manufacturing process, improving performance and tightening manufacturing tolerances. Either way, the improvement in GPU core temperature is noticeable during gaming workloads. 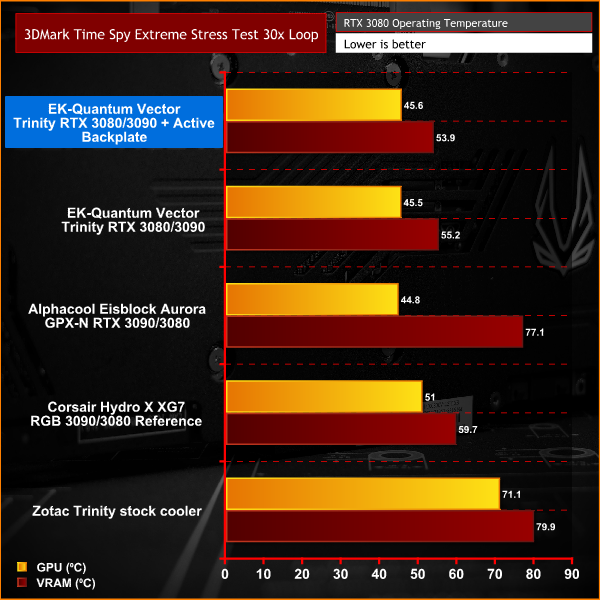 There is plenty of content already available showing the performance of the EK Active Backplate when used with an RTX 3090, we tested the backplate with a reference design RTX 3080 to see if there is any benefit of using this combination.

Both new samples of the XG7 water block sent from Corsair offered a noticeable decrease in GPU core temperature compared with the sample used in our original review. Meaning that the performance of the XG7 is closer to the EK-Quantum Vector block from the original review, which is a testament to Corsair’s R&D. Let's not forget that Corsair is still relatively new to custom water cooling.

We are not entirely sure why the original sample didn’t live up to expectations in terms of thermal performance, the block was re-mounted and tested several times but there was no improvement. It was a very early sample of the XG7 reference 3090/3080 block, possibly even pre-production. Corsair could have since refined its manufacturing process and reduced tolerances which is why both new samples performed better, and very closely compared to each other.

With this in mind, my overall opinion on the Corsair XG7 RTX 3090/3080 reference water block has definitely improved. I still think it is a very aesthetically pleasing water block with a very simple installation process. However, the improvement in thermal performance with these new samples means that it closes the gap to its rivals. 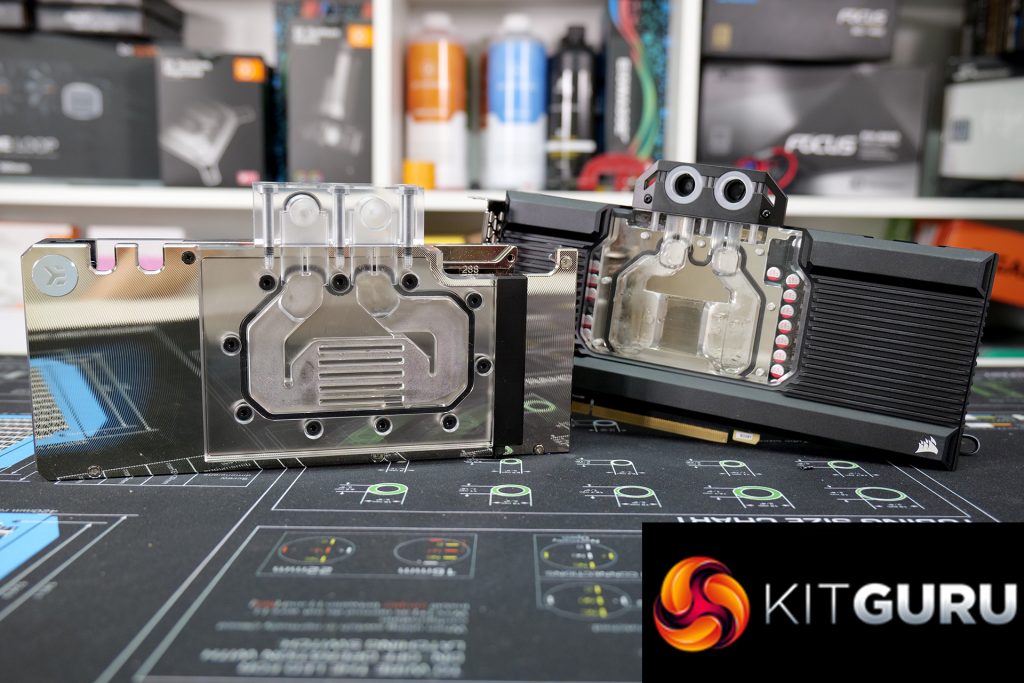 We did encounter an issue with the Active Backplate during installation though, and it is an issue that EKWB needs to look into pretty quickly. When installing the backplate during the video, one of the retaining screws wasn’t long enough to fully engage with the GPU water block standoff, so the screw wouldn’t tighten up at all, luckily we had a 2mm longer screw to hand, and that allowed us to fully tighten up the backplate as intended.

When disassembling the system after testing, another one of the backplate screws randomly flew out of the backplate too. This could have been disastrous if the screw had come out while the system was running, as it could have potentially have landed somewhere on the motherboard or in the power supply and caused a short, which in turn could have damaged the system. Luckily this didn’t happen but EKWB could have some very unhappy customers on their hands if this was to happen.

That potential issue aside, the EKWB Active Backplate looks great when installed, with RGB lighting now on both sides of the card. Installation doesn’t take too long and the online instructions are easy to follow. The Active Backplate might not be of great value for money to RTX 3080 users but great for owners of the flagship RTX 3090.

KitGuru says: With an improvement in thermal performance seen in these new XG7 samples from Corsair, the performance is much closer to that of the equivalent RTX 3080 reference block from EKWB.