The AMD Radeon RX 6000 series refresh is right around the corner and as a result, we're starting to see the first benchmark results popping up online. Recently, the RX 6750XT was spotted on GFXBench, showing performance parity with its predecessor, the RX 6700XT.

First shared by KOMACHI_ENSAKA (via VideoCardz), the Radeon RX 6750XT's GFXBench entry only includes a single benchmark called Aztec Ruins High Tier using the DirectX API. The onscreen result is strangely low, but the offscreen one is actually slightly higher than the Radeon RX 6700XT. 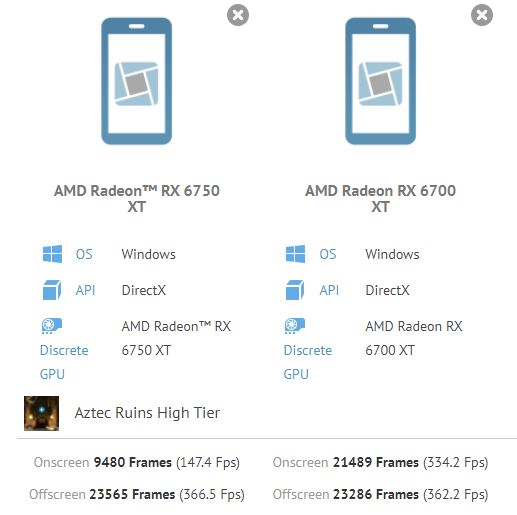 In Aztec Ruins High Tier, the RX 6750XT scored 366.5 frames per second, while the Radeon RX 6700XT achieved 362.2 FPS. That's just a 2% difference in favour of the refreshed card. In this case, the faster memory of the former doesn't seem to bring any considerable performance improvement, but that might not be the case in games and other tests.

Unfortunately, we don't have any more results to compare the two GPUs, but that will likely change in the coming days, as the rumoured May 10th launch approaches.

KitGuru says: While we aren't anticipating any major performance improvements here, this refresh could have the benefit of increasing stock levels and perhaps lowering prices.

This week, reports claim that Nvidia has a new GeForce GTX series graphics card on …