AMD has trademarked a new technology named Infinity Cache. This technology is expected to feature in the upcoming RDNA 2 graphics cards that AMD is developing, compensating the “lack” of bandwidth by offering a faster cache memory for data that is more frequently accessed.

As reported by @momomo_us, AMD has filed a trademark on Justia Trademarks of an unannounced technology called Infinity Cache. This technology was first mentioned on RedGamingTech YouTube channel, and according to them, it will feature in the Radeon RX 6000 series graphics cards.

The Radeon RX 6900 XT is allegedly coming with 16GB of GDDR6 memory on a 256-bit memory bus. Comparing to the Nvidia GeForce RTX 3080, which comes with 10GB of GDDR6X memory over a 320-bit memory bus, it sure has more VRAM than the green team graphics card, but the inferior memory bus gives less memory bandwidth to the AMD card. As per the rumours, this is where Infinity cache comes in. 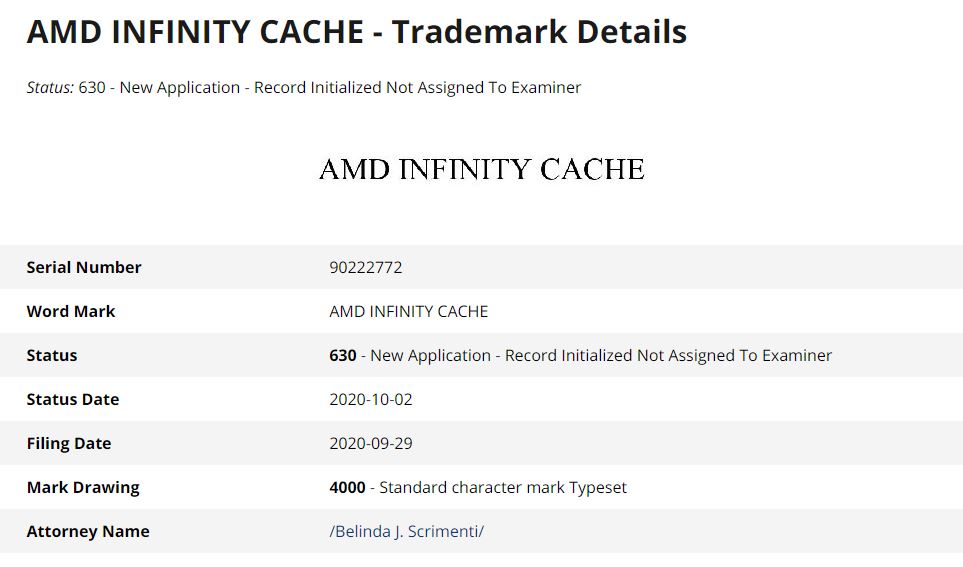 Infinity Cache is supposed to consist of 128MB of cache to increase the raw memory bandwidth. This would make the graphics card use the GDDR6 memory less often, therefore reducing the strain on it and the 256-bit memory bus. The patent says that Infinity Cache will be used in both CPUs and GPUs, meaning that the Ryzen 5000 series might also feature this technology.

AMD is set to announce its RDNA 2 graphics cards on October 28th. Discuss on our Facebook page, HERE.

KitGuru says: It will be interesting to see how Infinity Cache performs in real-world scenarios. Are many of you looking forward to the big announcements from AMD this month?