So far, only one board partner has released a custom Intel Arc Alchemist graphics card. That is changing this month, with ASRock revealing its first Intel Arc graphics card – a small, ITX version of the A380.

Like the reference cooling solution used by Intel on the Arc A380, the new ASRock Arc A380 Challenger ITX 6GB OC uses a single fan to cool the unit. With 0dB fan technology, the fan only spins up when required, allowing for silent operation at low loads. 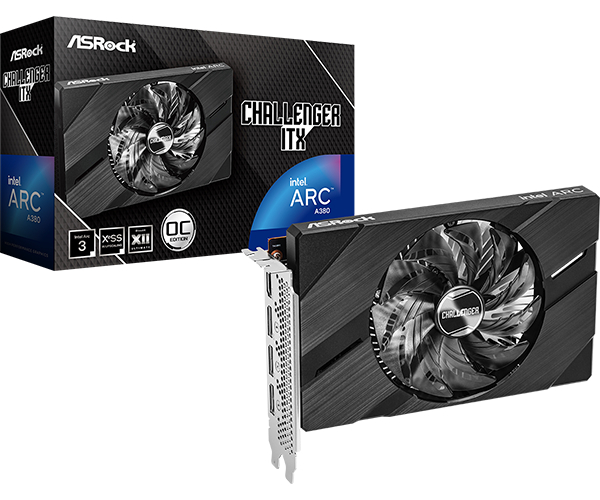 The ASRock Arc A380 Challenger ITX 6GB OC uses the ACM-G11 GPU with 1,024 FP32 cores. However, this one comes factory overclocked at 2,250MHz. As for the memory, there's 6GB GDDR6 at 15.5Gbps. A single 8-pin power connector powers the card. Available video outputs include 3x DisplayPorts 2.0 and an HDMI 2.0b.

For now, only ASRock's Chinese website has a product page for the ASRock Arc A380 Challenger ITX 6GB OC. The graphics card is already available for ¥1299 (about £158).

KitGuru says: ASRock has just become the first global AIB partner to launch an Intel Arc Alchemist card. Now, all that's left is for the likes of Asus, MSI, and Gigabyte to join the list.