Nvidia will host “a special brodcast event” on January 12th, 2021

Nvidia has scheduled a press event for January 12th that will focus on its RTX products. The company hasn't specified what will be presented during this event, but rumours suggest it could be RTX 30 series mobile GPUs, RTX 3080Ti, RTX 3060 or any combination of the three.

Just one day after the CES 2021, Nvidia will host its own event to “unveil the latest innovations in gaming and graphics”. Although they are not clear about what will be shown, there's a good chance that Nvidia will present us the 12GB variant of the RTX 3060, as we have previously covered. This GPU is expected to compete with AMD Radeon RX 6700 XT, which also might be introduced during AMD CES 2021's conference.

Another RTX product that might be announced during Nvidia's conference is the RTX 30 Mobile series of GPUs, which is expected to include RTX 3080, RTX 3070, and RTX 3060 SKUs. These SKUs are aimed at gaming laptops. 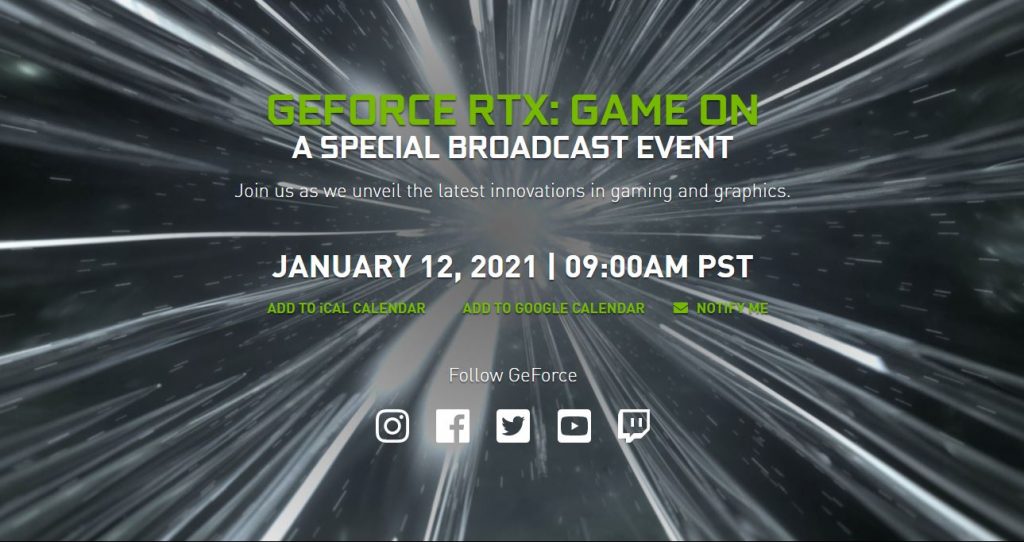 The last SKU that might be introduced is the RTX 3080Ti, which is expected to release in February. This rumoured 20GB graphics card is expected to compete with the currently “available” AMD Radeon RX 6900XT at the same price-point, while offering similar performance to an RTX 3090.

If you want to be notified when the event starts, you can do so HERE.

KitGuru says: What do you expect from Nvidia's event? Do you think Nvidia will announce both the RTX 3060 and 3080Ti? Or will it just focus on the RTX 30 mobile SKUs?