Today, AMD is making some noise in the professional graphics market with the introduction of the Instinct MI200 series accelerators. AMD claims the new Instinct MI250 and the MI250X boast up to 4.9x better performance than the competition in double precision (FP64) HPC applications and enable 380 TFLOPs of peak theoretical half-precision (FP16) performance for AI workloads.

The Instinct MI200 series GPUs are built on AMD's new CDNA 2 architecture and double up as AMD's very first multi-die GPUs, supporting up to 128GB of HBM2e memory. With these GPUs, combined with 3rd Gen EPYC processors, AMD will achieve exascale computing in collaboration with the US Department of Energy's Oak Ridge National Laboratory, using the Frontier supercomputer expected to deliver more than 1.5 exaflops of peak computing. 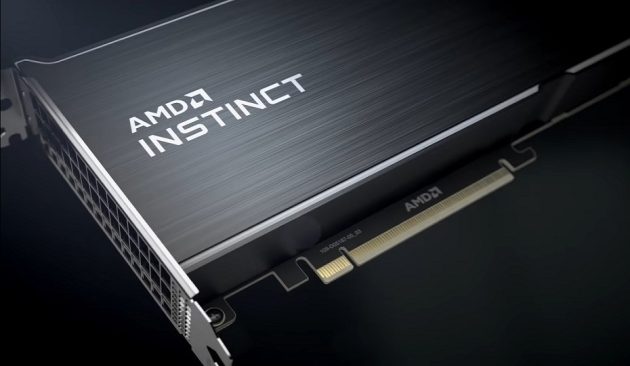 In the table below, you can see the specs for both the AMD Instinct MI250 and the MI250X:

As you would expect, AMD Infinity Fabric also makes a return here, with up to 8 Infinity Fabric links connecting the MI200 with an optimised 3rd Gen EPYC processor and other GPUs in the node to maximise overall performance and system throughput.

KitGuru Says: AMD has announced this just before Nvidia's next GTC conference, so it will be interesting to see how team green responds. For now, AMD looks to have some very impressive HPC accelerators on its hands here.