Last night, AMD held its ‘Next Horizon' event in San Francisco and proudly launched the world's first 7nm graphics cards in an effort to continue breaching the datacenter market. There are two new GPUs launching this week, the Radeon Instinct MI50 and the Radeon Instinct MI60, both utilizing Vega 20 on the 7nm process, with big upgrades to efficiency and performance.

With these new datacenter GPUs, AMD is looking to tackle cloud computing, HPC, deep learning and scientific applications. This is an area that Nvidia has been investing heavily in over the last few years and now AMD will be providing tougher competition. According to AMD, the MI60 is the world's fastest double precision PCIe accelerator, offering peak FP64 performance of up to 7.4 TFLOPS. 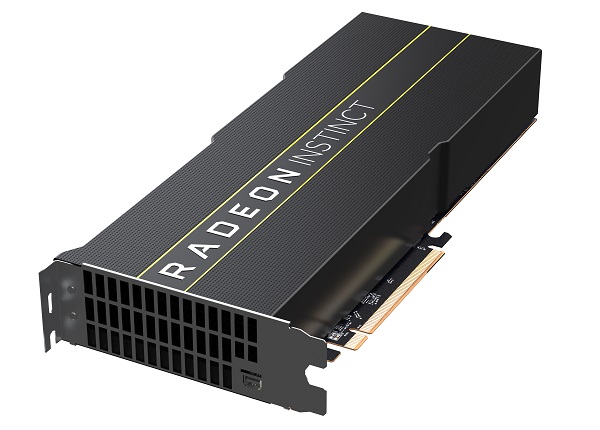 Aside from the jump to 7nm, both the Radeon Instinct MI50 and MI60 include HBM2 ECC memory with up to 1TB/s bandwidth and PCIe 4.0 interconnect, flexible FP16, FP32 and INT4/INT8 capabilities and two ‘Infinity Fabric' links per GPU. Using Infinity Fabric, users will be able to link up multiple Instinct cards with 200GB/s of peer-to-peer bandwidth.

The jump to 7nm allowed AMD to bump up the transistor count for Vega 20, growing from 12.5 billion to 13.2 billion. The new node allows the chip to be twice as dense while using 50 percent less power. The MI50 will have a boost clock speed of 1746MHz while the MI60 will be capable of boosting up to 1800MHz.

Right now, the Radeon Instinct MI60 should begin rolling out before the end of this year. Meanwhile, the MI50 will begin shipping in Q1 2019.

KitGuru Says: AMD is getting a jump on the 7nm generation with both GPUs and CPUs. Zen 2 is on track to begin rolling out in 2019 and hopefully we'll see more advancements on the GPU side with Navi.