Last month, AMD took its first steps into the AI/Deep Learning world by teaming up with Google to supply GPUs for the Google Compute Engine. Following that news, AMD stock began to rise but the company isn't done just yet as today, AMD unveiled the Radeon Instinct, a GPU for accelerating machine learning applications.

The Radeon Instinct Accelerators are based on current and upcoming GPU architectures from AMD. There are two cards debuting, the MI6, the MI8 and the MI25, the former uses a Polaris GPU which pushes 5.7 teraflops of compute performance with 16GB of video memory and a 150W TDP. The MI8 is based on a Fiji Nano GPU, comes with 8.2 teraflops of performance and comes equipped with 4GB of HBM. 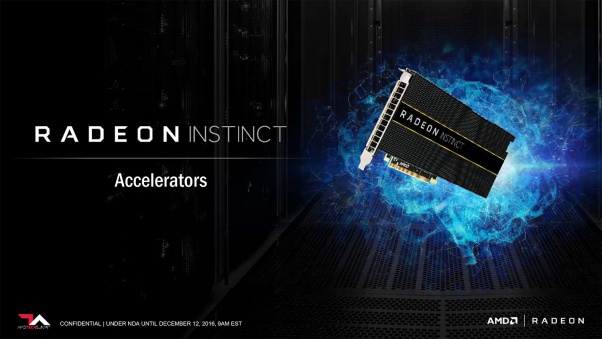 The MI25 comes with a Vega chip on board and is aimed at pure performance to drive Deep Learning applications. However, the GPUs are just one element of AMD's announcement today, the company has also announced MIOpen, a free, open-source library for GPU accelerators intended to enable high-performance machine intelligence implementations, and new, optimized deep learning frameworks on AMD’s ROCm software to build the foundation of the next evolution of machine intelligence workloads.

AMD is also working on new technologies to push beyond the limitations of PCIe Gen 3 by collaborating on a number of new standards that support broad ecosystem server CPU architectures including X86, OpenPOWER, and ARM AArch64.

Radeon Instinct GPUs will start shipping some time during the 1st half of 2017.

KitGuru Says: It looks like AMD is going to be getting more competitive in the Deep Learning and AI industries, which could end up bringing along a decent boost to income going forward. 2017 is certainly going to be an interesting year for AMD with all of the launches it has coming up.