We aren't expecting to see AMD's first gaming-focused Vega graphics card until January but it looks like someone attending the Radeon Vega Tech Day was willing to break NDA as footage of a consumer Vega GPU with 8GB of HBM running DOOM at 4K has been posted online.

The Vega Tech Day was supposed to be kept secret from the wider public but we initially heard about it happening last week. The actual GPU was kept inside of a closed case and away from view, so AMD is still being quite secretive about its consumer Vega card but nonetheless, benchmark results have got out, showing the Vega card going up against a GTX 1080 in DOOM's Vulkan mode at 4K and Ultra quality settings. 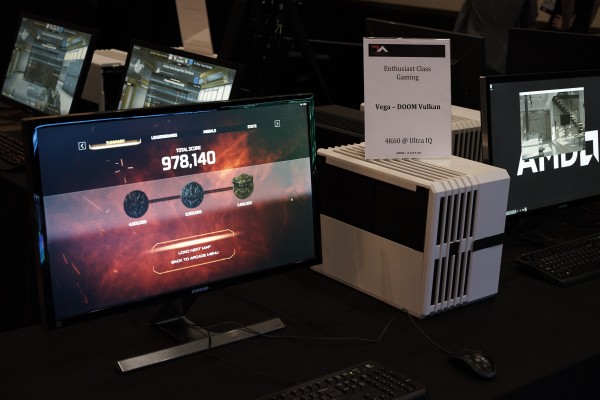 A video posted by Tekknological on YouTube shows DOOM holding steady well above 60 frames per second during regular gameplay. Meanwhile, pcgameshardware.de have some additional snaps of DOOM running, holding a 66 frames per second reading. This would put Vega's performance in competition with the GTX 1080.

Aside from the early performance numbers and 8GB of HBM2, the final thing confirmed from the leaks today is that Vega is in fact Device ID 687F:C1, which was leaked last week in a Ashes of the Singularity benchmark. At time it was theorised that perhaps this benchmark was the Polaris-based RX 490, but it appears to be Vega instead.

KitGuru Says: It looks like AMD's first gaming-oriented Vega graphics card is shaping up nicely and from the sounds of it, we should see something more official quite soon given that select members of the media are already being briefed. Are any of you looking forward to Vega? Are you happy with the level of performance demonstrated during the short DOOM demo?