Last week, AMD made a big end of 2014 splash with the launch of its new Catalyst Omega driver and it looks like it has certainly paid off as word has come down to us straight from AMD that the new driver has been downloaded over two million times in its first week.

The Catalyst Omega driver  brought a slew of new features to the table for AMD users, including Virtual Super Resolution (VSR), allowing users to render games at a higher resolution and then downsample it. 5K monitor support is also a big one, particularly now that the 5K iMac is out in the wild and we have monitors from the likes of Dell in the pipe line. 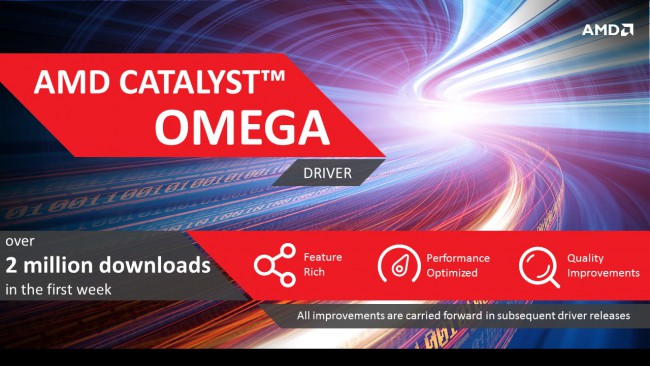 It is clear that AMD has put a lot of effort in to this driver launch, which also brings future support for FreeSync technology on certain GPUs, with Samsung being the first to launch monitors supporting the tech next year. Frame Pacing has seen improvements and AMD has been working on new video upscaling tools as well.

We have a full run down of the AMD Catalyst Omega driver, courtesy of our very own Leo Waldock, HERE. You can download it for yourself, HERE.

KitGuru Says: Congratulations to AMD on their new driver launch, two million downloads in one week is quite the milestone! Have any of you guys been using the new Omega driver? Are you happy with it?