Custom watercooling can be a daunting task, especially to those new to PC building, which is why all-in-one liquid cooling units have rapidly grown in popularity over the last couple of years. Now, easy to install AIO units are making their way to graphics cards as well, with Corsair launching two new cooling brackets this week, the Hydro Series HG10 N980 and N970.

These two cooling brackets will allow you to secure one of Corsair's AIO liquid coolers to a GTX 980Ti, Titan X, GTX 980 or a GTX 970 graphics card for superior cooling performance compared to some of the air coolers out there. 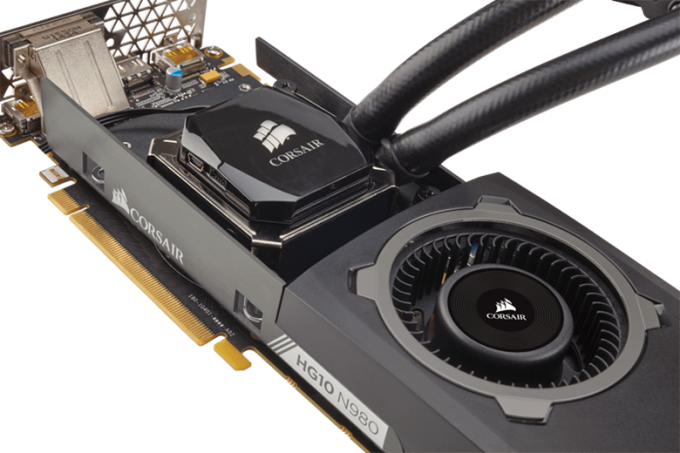 The HG10 N980 and N970's aluminium bracket and integrated 70mm low-noise blower fan also work to actively cool your GPU's other heat-producing components. The HG10 N980 actively cools both the card's memory and VRMs, while the HG10 N970 actively cools the VRMs. One thing to keep in mind is that the HG10 is built to work with Nvidia's stock PCB, so this bracket won't be compatible with every custom AIB variant out there.

Also, the AIO units and the HG10 brackets are sold separately, so you will still need to buy an additional liquid cooler. The HG10 N980 will fit the GTX 980Ti and Titan X, costing £29.99 here in the UK. The N970 pairs up with the GTX 970 and GTX 760 graphics cards and costs the same amount.