After five long years, Adam Jensen has returned this week in Deus Ex: Mankind Divided. Aside from being a sequel to the events of Deus Ex: Human Revolution, Mankind Divided is also a bit of a technical showpiece, as it is the first game to feature the brand new Dawn Engine, which was designed to leverage powerful PC hardware. Today we are going to be taking a look at the quality of Mankind Divided on the PC specifically, and see how well it runs on a range of graphics cards. 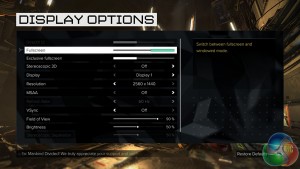 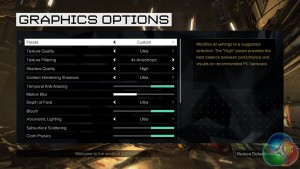 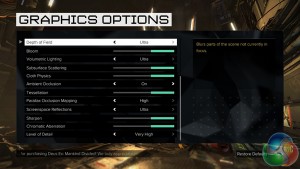 You can access the options menu either prior to launch, or in-game and from what we can see, it offers just about everything you would expect from a proper PC game. You can adjust the Field of View, monitor refresh rates and V-sync, while the graphics window brings along some advanced settings like screen space reflections, tessellation, hard contact shadows, volumetric lighting and more.

There is a lot to adjust here and the menus leave little to complain about. The only thing I would have changed personally is the way FOV is displayed, most games will just give you a number rather than a percentage, this is very minor though. One other thing worth looking out for is mouse sensitivity. The default setting is 50 percent, which ended up being way too high for me. I found that scaling it back to around 30 percent delivered better results. 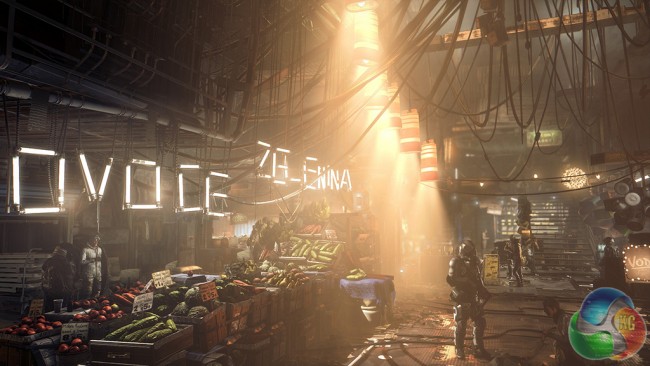 The game itself looks stunning. Running the game at Ultra settings with all of the effects switched on is truly a sight to behold. It certainly feels like the Dawn Engine was designed to push graphical boundaries, even on PC. There certainly hasn’t been any major downgrades here to keep things in line with consoles. 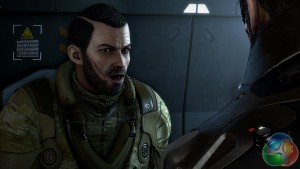 Everything from facial animations, to textures, to the lighting system and environmental effects really stand out. However, none of that will matter if the game is a struggle to run.

Today, I will be benchmarking Deus Ex: Mankind Divided on a system featuring an Intel Core i7 6700K, 16GB of G.Skill DDR4 RAM, a 1TB Samsung EVO SSD and an Asus Maximus VIII Hero motherboard. For graphics cards, I will be using an MSI GTX 1080 Gaming X, an MSI GTX 970 4G, a Sapphire R9 290 Vapor-X, an XFX R9 390X Ghost Edition and an R9 Fury X. None of the cards are overclocked in our tests.

We use the latest drivers for all of our tests. In this case, we are using Radeon Software Version 16.8.2 and Nvidia’s GeForce Game Ready 372.54 driver. Our results were collected running the game at its Ultra preset with Temporal AA on and MSAA off. We used the in-game benchmarking tool, which provides a fairly typical scenario for the game. It is also worth noting that the game does not have DirectX 12 support just yet, so these are DX11 results. As we mentioned before, this game does not hold back in the visual department and that is clearly reflected in our results. Even at 1080p, the GTX 1080 struggles to keep above 60 frames per second with everything switched on and 4K is pretty much out of the question entirely without turning some settings down. The Fury X comes in a close second place, sitting anywhere between 7 and 10 frames per second less across all resolutions.

If you are a mid-range GPU user with an R9 390x, R9 290 or a GTX 970, then you will be better off sticking to a lower graphical preset. You could manage at 1080p if you are okay with 30-40 frames per second but higher resolutions can be ruled out.

Given just how demanding this game turned out to be for every single GPU tested, I decided to play around with the settings a bit and see what we could do to perhaps squeeze some extra frames out while maintaining Ultra Textures and the advanced graphical effects. You can see my list of ‘optimised’ settings in the screenshots above. 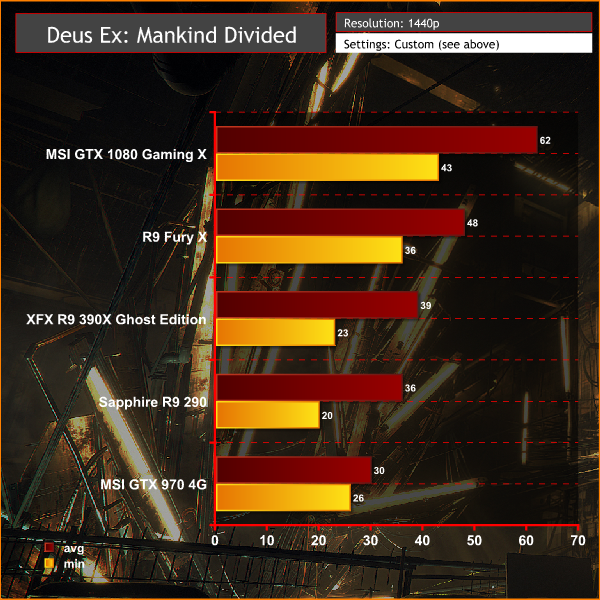 As you can see, turning down some of the more advanced settings produces some much better results all around. You can keep ultra shadows and textures but turning things like ambient occlusion and volumetric lighting down from their ‘Ultra’ settings provides a sizeable bump in frame rates.

With these settings, the GTX 1080 and R9 Fury X can average well above 60 frames per second at 1080p. The R9 390X and R9 290 manage to break into the 50 frames per second range but the GTX 970 still trails behind a bit. mid-range GPU users should probably think about turning down a few more settings to achieve smoother gameplay.

The GTX 1080 just about manages to hold 60 frames per second on average at 1440p, but all of our other cards fall short of the mark. If you want to play at 4K, it is starting to look like you may want to go down to a mix of high/medium settings for playable framerates.

I am a little torn on these performance numbers. Deus Ex: Mankind Divided is a very impressive game in terms of technical and visual prowess but I would have expected more from the GTX 1080 in particular. This is a £600 GPU that just came out a few months ago but this game really puts it through its paces, more so than any other game I have tested. One other thing I noticed is that while this is an ‘AMD Gaming Evolved’ title, the minimum frame rates on our AMD GPUs are very low compared to the averages. We are confident updated drivers will optimise this engine further.

Perhaps the DirectX 12 version of the game will unlock higher levels of performance, but that won’t be coming until September, so we will need to check back in then.

Now that we have discussed performance, let’s talk about the game itself. Deus Ex: Human Revolution was one of my favourite games back when it came out and I have been holding out for a sequel ever since. So far, from the eight hours I have played, Mankind Divided has not let me down. There have been no major bugs, graphical glitches or crashes and so far, the story has me hooked.

Without spoiling too much, right from the get go you learn that Sarrif Industries is no longer around and Adam Jensen has moved on to become part of Task Force 29 (TF29). Here, he uses his abilities to help fight terrorism, which is now rampant due to the state of the world after the ‘Aug Incident’, which takes place at the end of the last game.

Now, those with Augmentations live a life of oppression, with fewer rights than regular humans. Adam Jensen himself doesn’t have to deal with the brunt of it as he has all of the necessary security clearances to get past police checkpoints without much trouble. However, you will have to deal with some fairly mistrusting companions along the way.

Mankind Divided lets you choose between stealth and action gameplay but some of the in-game systems definitely seem biased towards stealth. For instance, you will get more XP for slipping through an area unnoticed, whereas you won’t see the same level of reward if you gun everyone down.

There are several side missions early on that you may be tempted to just brush off but they really help flesh out the world and will be necessary if you want to the XP to level up all of your augmentations.

If you were a fan of 2011’s Deus Ex: Human Revolution, then you will want to return for the sequel for sure. At worst, you might find parts of it to be as good as Human Revolution but in my opinion, this game exceeds in every way.

KitGuru Says: Deus Ex: Mankind Divided is an excellent game so far but a lot of graphics cards will struggle to run the game with all of the visuals cranked up to ultra. Perhaps we should stop asking if GPUs can run Crysis and start asking if they can run this instead. Aside from that though, the game is extremely polished on the PC and well worth picking up if you are a fan of the series.

Previous Latest AOC monitors on show at i58
Next Halo 5: Forge is coming to PC next month