The midrange GPU market is starting to look very interesting as not only has the RX 480 from AMD launched but now we are starting to hear quite a bit about Nvidia’s GTX 1060. Last night rumours pointed towards a launch taking place next week with a retail date set for the week after but now we also have some potential specifications for the GPU. 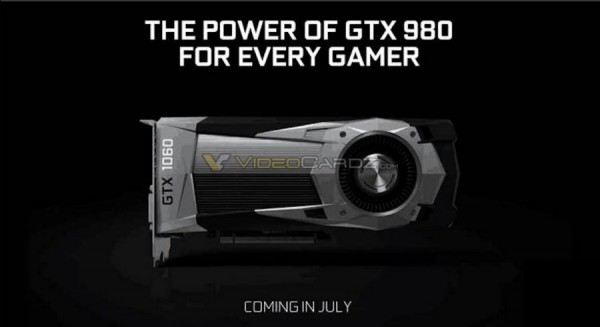 The report reiterates the 7th of July launch date that we heard yesterday and apparently the previously leaked image of the new cooler is also accurate.

According to the leaked slides, the GTX 1060 aims to bring GTX 980 performance to a more affordable price point. On top of that, the slides point towards the GPU being up to 1.4 times more efficient than the recently released RX 480, so it could end up being very competitive.

KitGuru Says: As always, take unofficial information with a pinch of salt. That said, if these rumours do prove true, then we don’t have much longer to hear something official, as the launch is said to take place next Friday. Are any of you in the market for a new GPU?