Today, MSI has officially launched the GeForce GTX 1080Ti Lightning Z. This is MSI’s flagship graphics card and in the company’s own words, it is “built to be perfect”, combining the tried and true Tri-Forzr cooler, Military Class 4 components and new SuperPipe technology to deliver an engineering masterpiece.

We had a sneak peak at the GTX 1080Ti Lightning Z at Computex earlier this month but today marks the official launch, as well as the full specification unveiling. As usual, the Lightning card is geared towards heavy overclocking, with a solid air cooler featuring three Torx 2.0 fans, and two ‘SuperPipes’, which are essentially 8mm heatpipes rated for faster heat transfer. If you want to kick your overclocking up a level, then this card also comes with a special LN2 BIOS for extreme overclocking.

There will also be an MSI OC kit included, using V-Check points to help you measure GPU, memory and PLL voltages, temperatures and more. 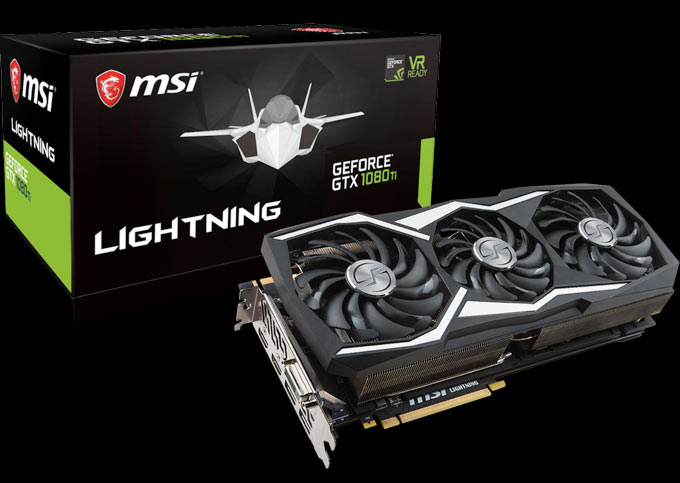 With Military Class 4 components, The Lightning Z is built to offer stability, with DrMOS 60A power phases (the highest rated available), Hi-C CAP cores, Super Ferrite Chokes, and Solid CAPs. While this GPU is built like a tank, it also has MSI’s Mystic (RGB) lighting, so it should look pretty too.

Here are the full specifications, including core clocks:

KitGuru Says: MSI’s lightning cards have always been high quality, so I’ll be looking forward to seeing what the 1080Ti Lightning is capable of. Are any of you planning on picking up a GTX 1080Ti at some point? Have any of you owned an MSI Lightning Edition card before?