A few weeks ago, a mysterious batch of shipping boxes were pictured, with the label showing them to be MSI RTX 3080 Ti graphics cards. Now, we have a bit more than a pile of brown boxes to look at, with packaging for the MSI Suprim X RTX 3080 Ti leaking online.

Videocardz received a photo of what looks to be a legitimate box for the MSI Suprim X RTX 3080 Ti. The Suprim X model is MSI's flagship, offering the best out-of-the-box overclocks, an improved cooler compared to the MSI Gaming series and a full metal backplate. 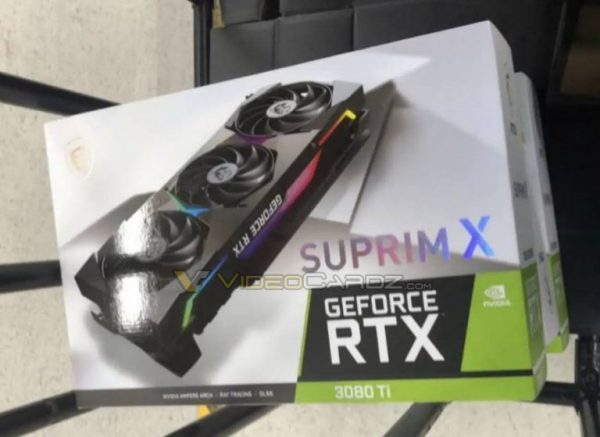 This isn't much on its own, but paired with other recent reports, this could be taken as evidence that the RTX 3080 Ti really is launching next month. Recent rumours have pointed towards a May 18th announcement, followed by retail availability on May 26th.

KitGuru Says: Nothing has been announced officially yet, so take this with a grain of salt. If the rumours of a May reveal are true, Nvidia will begin teasing within the next few weeks.