With Nvidia's RTX 20-series graphics cards now being out in the wild, we weren't expecting much more GPU news for 2018. However, from the sounds of it, both Nvidia and AMD have one more thing cooking. AMD is rumoured to be launching an RX 590 and Nvidia could be prepared to answer with a new GTX 1060 variation.

Last week, a 3DMark listing showed the RX 590, with a reported 10 percent performance boost over the RX 580. This would put Polaris in further competition with the GTX 1060. According to a recently spotted change to Nvidia's website, the company plans to answer this with a new GTX 1060 equipped with 6GB of GDDR5x memory, offering more memory bandwidth over the standard GDDR5 models. 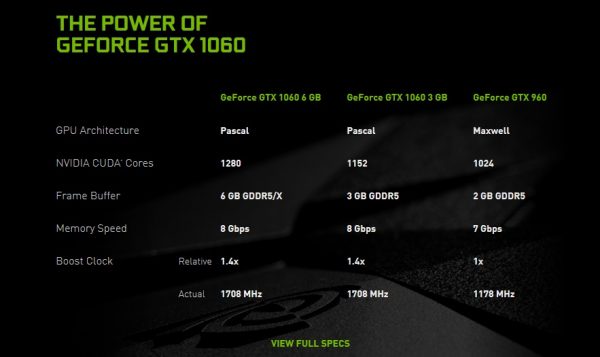 The Nvidia website now lists the GTX 1060 6GB spec with GDDR5/X memory, indicating that an updated SKU is on the way. Memory speed is still listed as 8Gbps but most GDDR5X modules run between 10-12Gbps.

This could have been a mistake that flew under the radar as Nvidia was updating its website for the RTX 20-series launch. All we can do now is wait and see how things play out.

KitGuru Says: The GTX 1060 has been on quite the journey with different versions. Its almost hard to believe that there could be another one in the pipeline but here we are. We'll update this if more information comes to light.