If you're planning on splashing out on an ROG Strix GTX 1080Ti soon with the intention of watercooling it, then you'll want to pay careful attention to the serial number on the box. Over on the EKWB website, the water block provider has issued a warning for customers, saying cards in the following S/N range won't be compatible with the EK-FC1080 GTX Ti Strix full cover water block or the EK-MLC GPU module: 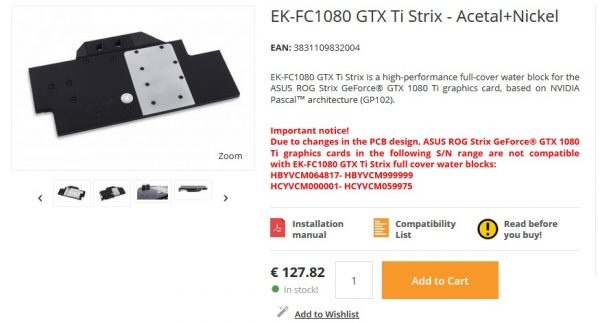 Based on the serial numbers, these particular ROG Strix GTX 1080Ti cards were manufactured after November 2017, so it is a relatively new change. If you're picking up an ROG Strix GTX 1080Ti with the intention of using an EK waterblock, then take heed, you may be able to get a compatible waterblock elsewhere.

KitGuru Says: PCB design changes rarely cause issues like this. Perhaps we'll see EKWB release a revised waterblock to fit the new Strix PCB design, though nothing has been confirmed on that front.