Over the last few days, there has been plenty of talk surrounding AMD's incoming RX 500X series. Mentions of the new GPU series began popping up earlier this week and while imaginations ran wild, there doesn't seem to be much to get excited about here. The Radeon RX 500X series seems to be a rebrand for OEMs to use in pre-built PCs as well as laptops.

This isn't an uncommon practice. Back in the day there was a Radeon 8000 series dedicated to OEMs and laptop builders too. These RX 500X series GPUs won't be available for consumers to just buy themselves, but even so, judging by AMD's official website (via Videocardz) there wouldn't be much reason to. The RX 500X series has the same clock frequencies, memory configuration and general specs as the RX 500 series. 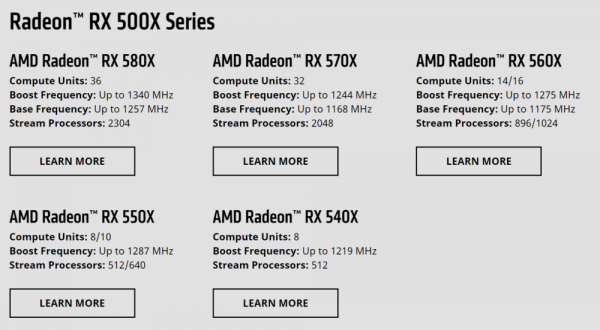 This isn't particularly surprising, as there was no marketing push or teasing from AMD to suggest that a new round of Polaris-based GPUs were on the way for consumers.

KitGuru Says: It looks like we can safely take our tin foil hats off now, as the RX 500X series appears to have been quietly made public. Perhaps now we can expect to see more PCs from the likes of Dell, HP, Lenovo and others with AMD graphics under the hood, but that seems to be about it.

Previous Apple ordered to pay $502.6 million in patent infringement case
Next The CIA Wants To Compromise Your Router