In recent months, we've been hearing about a new partnership between ASUS and Noctua, which will see Noctua cooling technology utilised on an ASUS graphics card. Now, the first images of this collaborative GPU have surfaced.

On the ASUS ROG Vietnam Facebook page (via Videocardz), the first renders of the ASUS x Noctua graphics card were posted, showing a chunky RTX 3070 with a hefty heatsink and Noctua's classic brown and beige fans. The initial post has since been taken down, but as you would expect, the picture has already been archived and spread across the web. 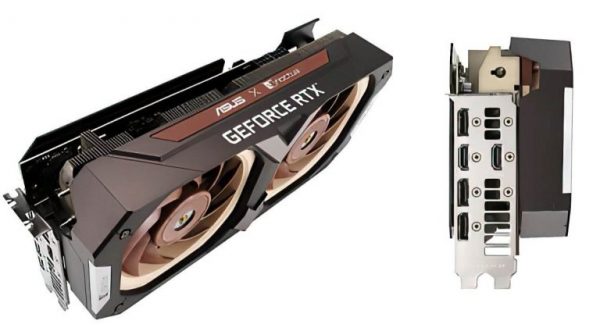 The card is a 3.5-slot design, so it is thicker than most RTX 3070 graphics cards. We can also see that it will include two 8-pin power connectors, three DisplayPorts and two HDMI connections. The card is officially known as the Asus GeForce RTX 3070 OC Noctua, so we can expect a factory overclock to be applied.

Unfortunately, that's all we have for now, as we're still awaiting an official announcement and confirmation on pricing and availability. It is possible that this card will only be available in limited quantities and in limited regions.

KitGuru Says: Noctua has such a great reputation when it comes to CPU cooling, so it will be very interesting to see how that translates to a GPU. Now that photos are floating around, an official announcement shouldn't be too far off.