Over the weekend we heard that Ubisoft and Nvidia may be teaming up once again this year for a holiday season graphics card/free game promotion but now, we have official confirmation. Starting from today, if you buy a GTX 1080 or a GTX 1070 from participating retailers, you will also get a free copy of Watch Dogs 2, which launches on PC on the 29th of November.

Watch Dogs 2 is already out on consoles and has received favourable reviews so far. I’ve had the chance to play around six hours of the game myself on the PS4 and one thing is clear, this is a pretty big departure from the first game in terms of character development and story. This time around, you are following Marcus and his group of hacker friends as they drum up support to take down the corrupt ctOS system. Overall, it’s a much more light-hearted game with a more humorous and fun vibe, which is a step away from the moody Aiden Pierce and his quest for revenge featured in Watch Dogs 1. 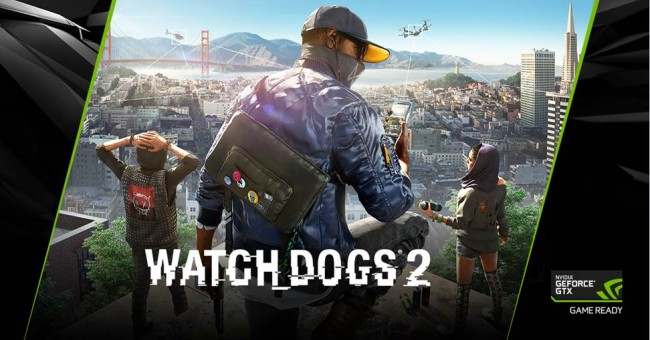 Similarly to Watch Dogs 1, the sequel also features some Nvidia technology on PC, including HBAO+, TXAA and HFTS/PCSS shadows. The game will also be shipping with support for Ansel, Nvidia’s powerful screenshot tool that allows you to take ultra high-resolution captures.

Right now, we don’t know how long this promotion is running but if you are looking to pick up a new GPU soon, then you may want to keep an eye out for this offer.

KitGuru Says: I’ve been playing Watch Dogs 2 for a couple of days now and I’m surprised by how much I’ve been enjoying it so far. That said, I have been playing the PS4 version and Ubisoft doesn’t have the best track record on PC. Hopefully the game lives up to its good reputation when the PC launch rolls around on the 29th.