A few weeks after we first saw leaks of the card, XFX has officially announced the RX Vega 64 and RX Vega 56 Double Edition. Both cards come with a newly designed custom cooler and dual 8-pin power connectors, though out of the box clock speeds seem to match the reference RX Vega models.

The Double Edition cooler certainly stands out due to its rather odd shape. There is a cut out in the center of the black shroud, two large cooling fans, a heatsink and plenty of heatpipes. The cooler extends across the entire length of the card. For I/O, you get three DisplayPort connections and one HDMI 2.0 connector. 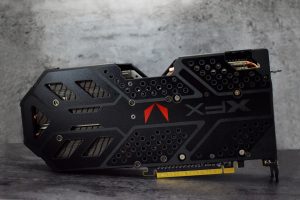 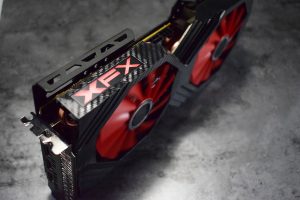 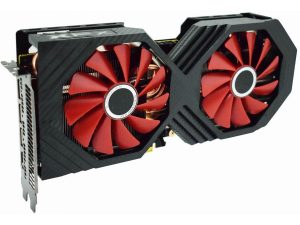 Both cards come with the same specs as the reference Vega GPUs according to Videocardz. So you get a 1247MHz base speed on the 64 with a 1546MHz boost. Meanwhile on the Vega 56 card you get an 1156MHz base clock and a 1471MHz boost clock. Both come with 8GB of HBM2 memory.

There is no word on pricing or a release date just yet, but these should hit the market relatively soon.

KitGuru Says: Custom versions of the RX Vega are finally starting to roll out. Are any of you considering upgrading to Vega at this point? Are you still hoping to see more custom cooled versions first?