The AMD FX8350 Black Edition processor has failed to get the geek in me aroused. When I reviewed the FX 8150 back in October 2011 I thought it was going to be the first in a series of processors which would gradually get stronger over the coming months. Sadly, excessive power consumption and less than stellar performance meant that AMD couldn’t manage to dethrone Intel from the top spot.

Fast forward to just over a year later and AMD have released the FX8350 and we seem to be back in the same position again. While the FX8350 is certainly not a bad design, it seems to be that AMD just can’t design a mainstream enthusiast processor which can issue a challenge to Intel for mass volume sales.

When we look at outright performance, the FX8350 is certainly faster than the FX8150, but considering the clock advantage it would need to be. Our Cinebench R11.5 testing is particularly interesting because we can see that the new architectural changes have enhanced performance when both are clocked to the same frequency. At 4.6ghz, the FX8350 scores 7.56 points compared to 7.32 points from the FX8150. This is slightly faster than the Core i5 2500k at 4.6ghz, which scores 7.29 points.

Sadly, while the FX8350 is certainly a little quicker than the last generation mainstream Intel quad core design (without HT), we can still see the 8 core AMD architecture is sadly lacking in outright horsepower. AMD have still no answer to the current generation 3570k or 3770k processors and we sadly can’t see that happening anytime soon.

Looking past the rather weak core performance, I still have a concern with power consumption from the 8 core AMD processor designs. At default clock speeds, the FX8350 consumes more power than the Intel Core i7 3770k when overvolted and overclocked to 4.8ghz. I can accept that this is a downside of cramming more cores into the die, but when we factor in the relevant weak performance from the individual cores, it is hard to recommend this processor over competing Intel parts.

I was instructed a couple of hours before launch that the AMD FX8850 will be retailing for around the £150 inc vat mark. I simply cannot recommend this processor due to overall cost of ownership. If you want a 990FX motherboard, then be prepared to pay around £135 inc vat+.

Let’s get this into perspective … the Intel Core i5 3570k is only £30 more expensive than the FX8350, however you can pick up an award winning Gigabyte or Asus Z77 board for around £80 inc vat, so the Intel system is not only less expensive, but it would consume less power, and be ultimately quicker too, especially as the 3570k will hit 5GHZ without much effort.

Playing devil’s advocate we could argue that it is possible to save money and buy an AMD 970 motherboard, but would you really want to partner AMD’s best 8 core Black Edition processor with anything but a 990FX mobo? No, We think not.

We can’t give the FX8350 Black Edition processor any award this time around. More than a year has passed since we reviewed the FX8150 and AMD have failed to release a killer product to lure enthusiast users away from Intel offerings at close to the same price point.

That said, if you are an AMD purist then it makes for the foundation of a good system build.

You can buy this processor for £150 inc vat from ARIA in the UK.

Kitguru says: We don’t think AMD can answer the challenge from Intel. Not this year anyway.

The Asus Sabertooth 990FX R2 is a high performance, well balanced motherboard. I reviewed the first revision of this board back in May last year and it claimed our top award. Over a year later and it still offers a tempting proposition for an AMD user. The motherboard is built to the standards we would expect from ASUS and we never experienced a single hard lock or issue during testing.

We did try to push some memory to 2,500mhz and it wouldn’t post, but a simple press of the MEM OK button cured the problem. When paired up with the FX8350 Black Edition, we feel it makes for a strong pairing although I really find it hard to recommend AMD against the wealth of Intel offerings right now.

The biggest problem that AMD face in 2012 is the price of their 990FX motherboards which are often around £130-£180 inc vat. In all honesty if I was buying a new budget based gaming system for myself, I would adopt the bargain, high performance Asus P8Z77-V LX motherboard with an Intel Core i5 3570K processor. It would cost less than the AMD FX8350 & Sabertooth 990FX R2 system, perform better and consume less power at the socket.

We love ASUS UEFI BIOS configurations and rate them as the finest on the market today. They are always very intuitive and all the settings are exactly where you want them to be. Stability is equally as impressive and there are no shortage of ports on this board either.

In the United Kingdom you can pick up the Sabertooth 990FX R2 motherboard for £135 inc vat. It is one of the finest 990FX boards we have tested, although in the grand scheme of things, it is rather expensive compared to some Z77 products and raises the cost of AMD FX ownership substantially.

We have dropped the score of this board by a single point since last year, as it is rather expensive compared to some of the latest high performance Z77 motherboards.

Kitguru says: An excellent 990FX motherboard from ASUS, although rather expensive.

The Gigabyte HD7970 graphics card has impressed me during testing. It is very quiet thanks to the non aggressive fan tri-fan profile configuration. The card can barely be heard, even when playing a demanding Direct X 11 title, a significant improvement over the AMD GHZ reference design.

We already know that the HD7970 is a fast card, able to power through the latest game engines without a problem. If you are fortunate enough to own a HD7970 Edition then you will be able to maximise all of the settings in current game titles.

When paired up with the Asus Sabertooth 990FX motherboard and AMD FX8350 Black Edition processor you have the foundation for a very capable gaming system, and a good core set of components if you want to game later at 5760×1080 across three screens.

Operating temperatures of this card are good, it peaks at around 70c under extended load and stability is never a concern.

There are certainly no shortage of high performance HD7970 graphics cards available today, but this card can be found for around the £315 mark which means it also offers very good value for money.

Kitguru says: An excellent all round performance card which doesn’t make a racket under load. 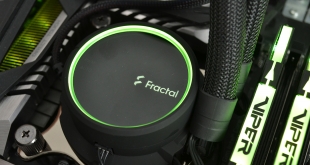