AMD Radeon R9 Fury graphics cards will be based on a version of “Fiji” graphics processing unit with 3584 stream processors, 192 texture units, 64 raster operations pipelines and 4096-bit memory interface. The adapters will be equipped with 4GB of HBM memory operating at 1GHz. Select makers of graphics cards will be allowed to use their own coolers and eventually design their own printed-circuit boards for such cards. 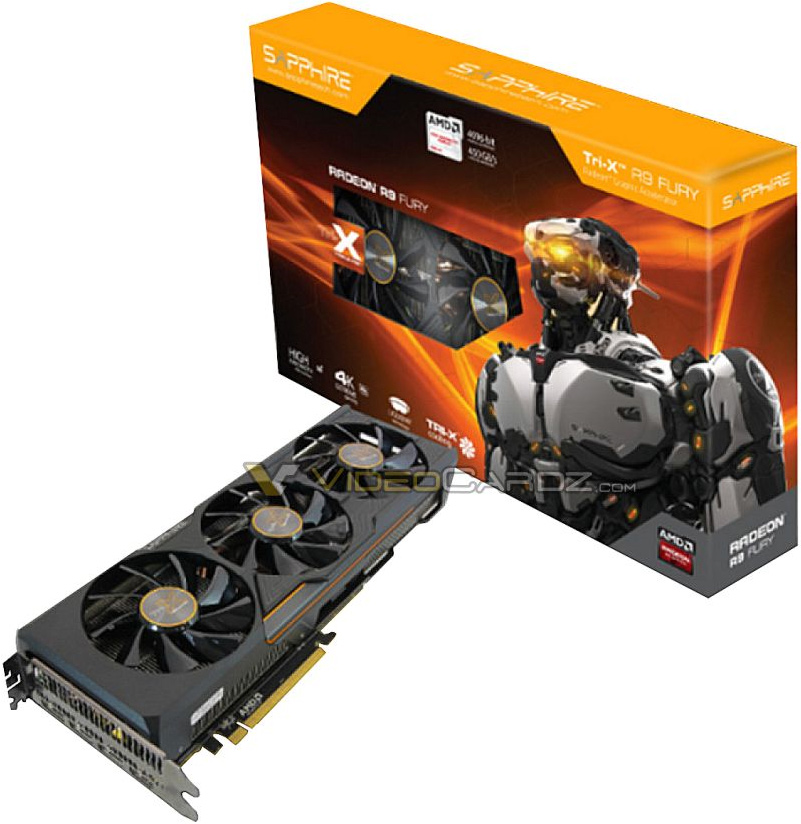 According to VideoCardz, Sapphire will offer two versions of Tri-X R9 Fury graphics adapters: one with 1GHz GPU clock-rate and another with 1040MHz GPU frequency. Both graphics boards will use the company’s own Tri-X cooler with three fans and a backplate. Both cards will be equipped with four display connectors: three DisplayPort 1.2 and one HDMI (1.4a).

Sapphire is one of the closest partners of AMD and is among the largest suppliers of Radeon adapters on the planet. If the company does not overclock the “Fiji” graphics processor on its Radeon R9 Fury graphics adapters significantly, then this may indicate that the GPU is not a really good overclocker. Due to low overclockability of AMD’s “Fiji” chip, performance difference between Radeon R9 Fury and Radeon R9 Fury X will be as high as 25 per cent.

AMD and Sapphire did not comment on the news-story.

KitGuru Says: The Fury X was designed to run at a max temperature of 50 degrees under load so it will be interesting to see how these air-cooled versions perform, especially where cooling is concerned.