In the business-only section of CeBIT 2014, the folks at Seagate were showing off a massive block of storage that points the way to a very interesting future. KitGuru feels the fabric of Seagate’s fibres.

That’s the personal use end of the storage spectrum.

Over in the land of the enterprise, the numbers get a lot bigger. Much bigger. A fully loaded, Seagate Kinetic rack mounted unit is really impressive. Rainer Hoksch, Seagate technical support guru, explained the differences, “With Kinetic, we have blown the old methods clear out of the water. Everything is different. Everything is object oriented”.

We know what that means in programming terms, but what about storage?

“If you wanted to put a meal in the fridge for later, it’s unlikely that you would put the potatoes into one smaller plate, the meat on another and the veg into a third, storing each in a different place”, said Rainer. “You would simply put the whole plate into the fridge at once”.

“When you take it back out, you take it out in one go. That’s object oriented storage in a nutshell”, Rainer explained.

What are the advantages?

“The system is much faster, smoother, more flexible”, he replied.

Rainer’s demonstration unit was fully populated with a specific kind of 4TB hard drive that has been designed for Seagate Kinetic storage. 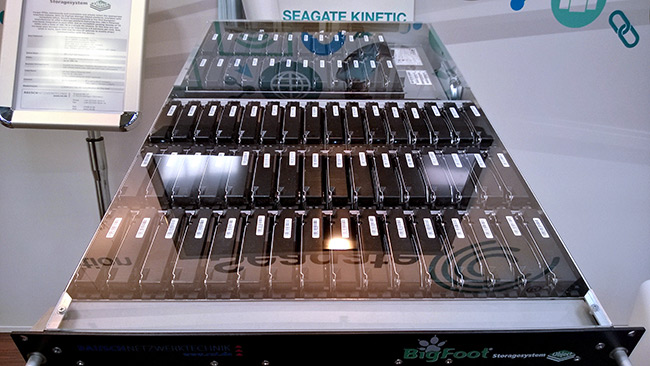 .
KitGuru says: Four of these beauties in a single rack would give you over 1 PetaByte of storage. We ALL want this in the house. You know. For backup purposes only.