HGST has launched its first 10TB helium filled hard drive for general purpose use. The Ultrastar HE10 is more power efficient than an air-filled drive, using 56-watts less per terabyte. This is the company’s third-generation helium drive, offering two additional terabytes of storage, and is aimed at enterprise or data centre customers primarily.

HGST had come out with a 10TB drive previously, though it used a new technique to allow more overlapping tracks. This time around, there has been no need to implement such a technique to get things working. 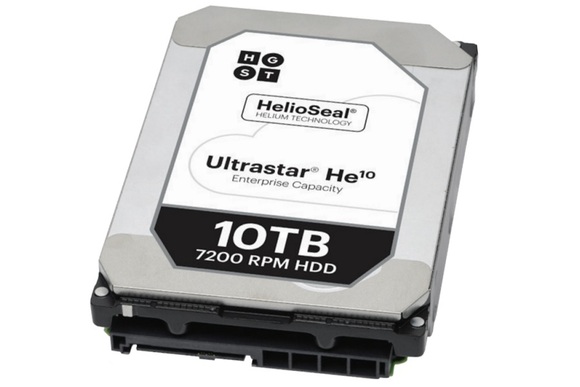 The 10TB helium drive is currently being sampled out to HGST’s clients and will be available to buy early next year as a barebones unit, or as part of the company’s Active Archive system. These 10TB discs will help businesses with higher data requirements as more and more devices come online and require space.

Right now the Ultrastar HE10 comes with a 2.5 million mean-time-between-failures rating, which essentially makes it more reliable on average than other drives currently using similar technology. There is a five year warranty to boot, which you would expect from such a high-end hard drive.

KitGuru Says: Storage requirements have definitely grown over the years, even more so for big businesses and data centres.