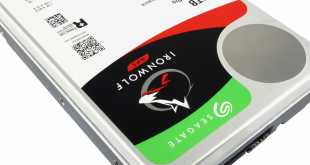 Seagate’s IronWolf Pro range of hard drives have been designed for use in commercial and enterprise NAS devices from 1-bay units all the way up to 24-bay systems. The new flagship of the range is the 14TB drive that has just been launched. 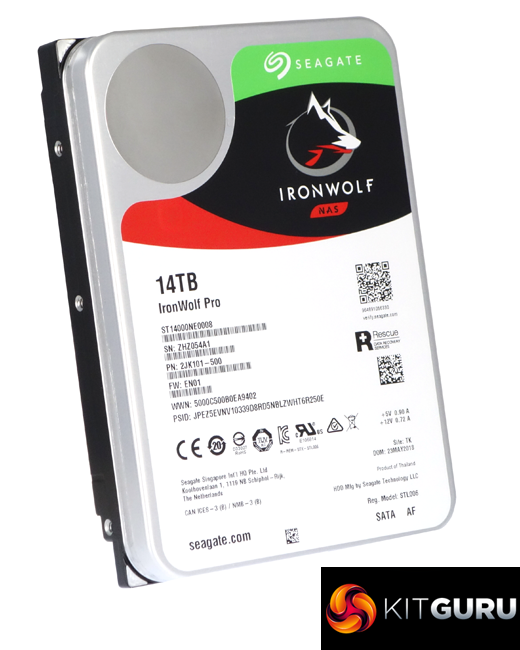 Seagate has just launched a range of 14TB drives covering a wide range of market segments for its Guardian Series; the BarraCuda Pro aimed at the consumer/desktop segment, the surveillance-optimised SkyHawk drive and finally the IronWolf and IronWolf Pro drives aimed at NAS enclosures.

The 16TB IronWolf Pro uses Helium technology which allows for 8 x 1.75TB platters together with 16 heads to be crammed into a 3.5in format drive with a height of just 26.11mm. The drive has a spindle speed of 7,200rpm with a 256MB cache which gives the drive an official transfer rate of 250MB/s while the average latency is quoted at 4.16ms.

Seagate have increased the areal density of the platters from the 923 Gb/in2 of the 12TB IronWolf Pro to 1058 GB/in2 by using narrower tracks. To overcome any errors in accuracy because of these narrower tracks, Seagate have turned to TDMR (Two-Dimensional Magnetic Recording) technology. TDMR uses two read elements in the drive head to improve tracking accuracy.

The official workload rating of the drive is 300TB/year with a MTBF of 1.2M hours and Seagate back the drive with a 5 year warranty.

Previous AMD’s EPYC success is paving the way for 7nm server chips
Next Telltale Games is closing down, The Walking Dead final season may not be finished