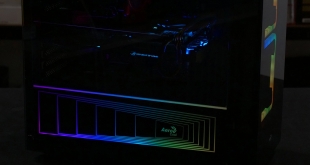 Aerocool Tor is a budget ATX case that offers a tempting combination of tempered glass panels and a pair of ARGB fans at the front that are connected to the lighting in the power supply cover. The lighting system is controlled by an RGB fan hub that can manage as many as ten fans, yet despite that you can buy this case for as little as £62.

If you fancy an even larger dose of RGB you can trade up to the Tor Pro at £89 that comes with an extra RGB fan at the front and upgrades the plain rear fan for a fourth RGB unit. Today we are focusing on the cheaper model.

When you look at the layout of Tor the obvious thought is that those front fans are sealed in behind the glass, much like Corsair's Carbide 678C. How the heck can a case draw in air through a solid front panel? The answer is that it cannot and the air intake is in the roof of the case, but unlike the Corsair 678C there is no intake fan in the roof of Tor.

On the face of it this does not sound like a recipe for success, however we maintain an open mind at KitGuru and provided the working temperatures look OK we don’t mind how Aerocool goes about its business.

The main feature of Aerocool Tor is the pair of Edge 14 ARGB fans at the front of the case. Functionally these are 120mm fans with the addition of a ring of LEDs around the periphery which means the mounts are the familiar 120mm size while the spacing is wider. You cannot mount a radiator on these fans which means it is impractical to use a liquid cooling system inside Tor.

It is also worth pointing out the six-pin connectors on the Edge 14 fans use a proprietary pin-out that handles both RGB and PWM. This makes the connections to the fan hub both quick and easy – however it also means you cannot add other brands of fan to the hub.

We are confident that Tor will appeal to PC builders working on a tight budget who are won over by the shiny lights and simply want to construct a new PC with the minimum of fuss. It seems unlikely these people will have a shelf of Corsair or Cooler Master RGB fans so this question of compatibility is unlikely to present a problem. Similarly we imagine the customer will plump for a simple air cooler to save both money and hassle so the question of whether or not Tor supports a liquid cooler is unlikely to be a major issue.

Once you move beyond those points you face the usual issues building a PC in a budget case. The interior is fairly small and cable management cut-outs are few and far between. Behind the rear panel you will find a modest amount of space for the power supply cables, but if you decide to load up your Tor with multiple hard drives and SSDs we are quite sure you will struggle with the cables.

Having said all that, we didn’t hit any problems and our Ryzen 7 build with Vega 64 graphics looked clean and tidy with plenty of RGB action to delight our audience.

To put this case through its cooling paces we will be using a test system consisting of an AMD Ryzen 7 2700X CPU and Asus ROG Strix RX Vega 64 graphics. This system allows us to produce a substantial amount of heat and effectively test the Aerocool Tor‘s cooling capabilities. 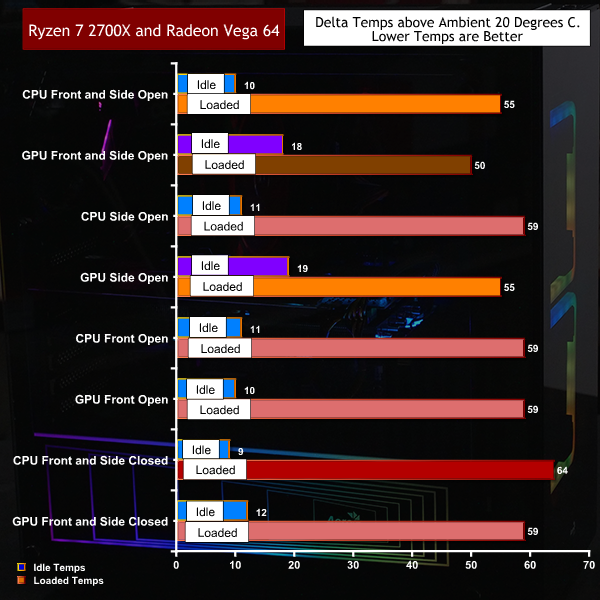 That is a significant change but it suggests the top of the case breathes fairly well. If you use less extreme hardware you are certain to get lower temperatures so while airflow is certainly not optimal, it would be unfair to level too much criticism.

When looking at the Aerocool Tor, it is definitely a case of ‘form' over ‘function', with a particular emphasis on RGB lighting. This is made clear by the pair of Edge 14 RGB fans, which are sealed behind the front panel and barely get the chance to circulate air. We find this frustrating but can see why Aerocool has created Tor this way. If you took the same core chassis and perhaps made it a bit taller and then added two intake fans in the roof it would doubtless work considerably better. The question is, would you be able to see the RGB?

Taking a step back we can see that Aerocool has taken a relatively basic chassis and added a certain amount of RGB inside the front panel and the power supply shroud, and has topped it off with some really neat hardware controls both on the fan hub and the front panel of the case. 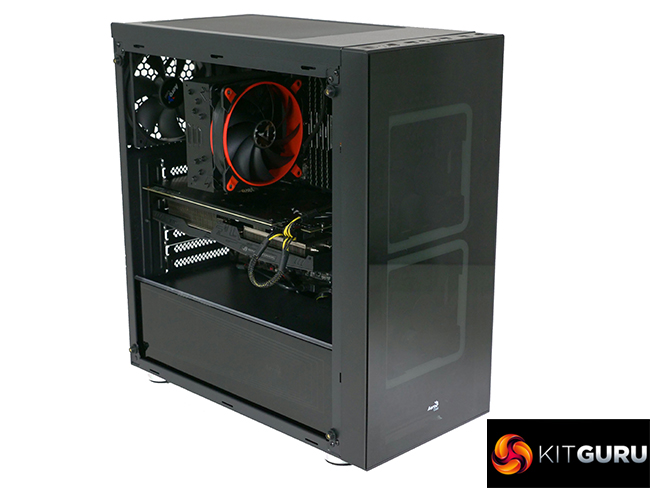 It is inevitable that there is a question mark over the cooling in a case that seems to be designed with aesthetics as its top priority. We are not fussed whether air comes in the top, front or bottom of the case – however Tor clearly has an open roof while the fans are positioned at the front. If Aerocool wants to maintain the RGB aesthetic, it makes sense to put light strips at the front and plain black fans in the roof to aid air flow.

Other aspects of Tor such as the marginal cable management and the finish of the panels are simply what you expect with a budget case. In that respect there are few surprises and, at this price point, few criticisms. It mainly comes down to your priorities – are you looking for maximum RGB or maximum air flow?

KitGuru says: Aerocool Tor is a budget case with the emphasis on RGB rather than air flow.