G.Skill is teaming up with MSI to deliver co-branded Trident Z Maverik DDR4 member kits as part of MSI's MPG Gaming Maverik bundle. Offering speeds up to 3600MHz and capacities up to 32GB, the Trident Z Maverik memory kits aim to be “the ideal companion” for high-end gaming on the Intel Z590 platform.

G.Skill and MSI have worked together in the past, often teaming up to push the boundaries of extreme memory speeds. Trident Z Maverik memory has a few visual differences compared to standard G.Skill Trident Z RGB memory, for starters, MPG Maverik and Trident Z Maverik branding is present on the heatsink, in addition to both of G.Skill and MSI's logos on the RGB light bar. 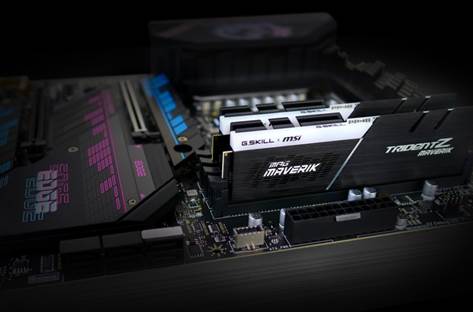 G.Skill and MSI's co-branded memory kits won't be available as a standalone product. Instead, this is an exclusive component for the MSI MPG Gaming Maverik bundle, which includes a CPU, memory, motherboard, case and liquid cooler.

Unfortunately, pricing and availability for this bundle has not been announced yet but we'll update this story once we have those details.

KitGuru Says: We still need to learn how much this costs, but on paper, the MSI MPG Gaming Maverik bundle is looking great and would be a good foundation for a new gaming PC build.