With the jump to 3rd Gen Ryzen processors and the X570 chipset, RAM speeds have greatly improved on AMD’s platform. As a result, we have already started seeing new ‘Ryzen optimised’ memory kits hitting the market and today, G.Skill is launching its fastest yet. 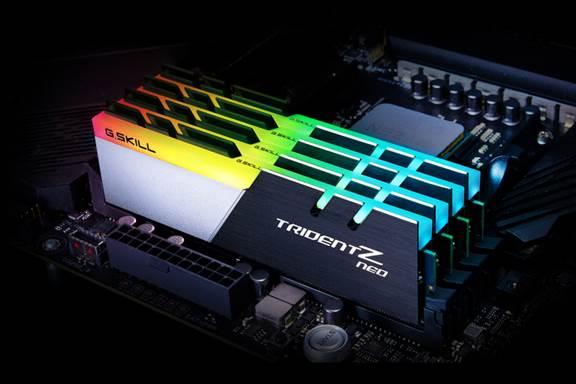 The DDR4-3800 Trident Z Neo kit will come in 8GB x 2 or 8GB x 4 configurations and are built with Samsung B-dies, which tend to be favoured by overclocking enthusiasts. During a test using a Ryzen 9 3900X and an MSI MEG X570 GODLIKE motherboard, the G.Skill team was able to push this kit to deliver memory bandwidth of 58GB/s, 56GB/s and 58GB/s per second in read, write and copy respectively.

If you are putting together a Ryzen-based system this year, then be sure to keep an eye out as these new memory kits will be available at retail very soon.

KitGuru Says: G.Skill always makes quality RAM and its nice to see AMD getting its own optimised kits. Are many of you planning on building a new Ryzen system this year? Will you be looking to pick up some Trident Z Neo memory to go along with it?