We have a new world record holder for the fastest DDR4 memory. This week, HyperX announced that its 4600MHz Predator memory has been successfully overclocked to a whopping 7156MHz, the highest frequency achieved to date.

HyperX is of course the gaming division of Kingston and has served the memory market for decades now. This particular record-breaking overclock was achieved by the MSI OC team in Taiwan, using an 8GB HyperX 4600MHz Predator memory stick, an MSI MEG Z590I UNIFY motherboard and an 11th Gen Intel Core i9-11900KF running at 3.5GHz. 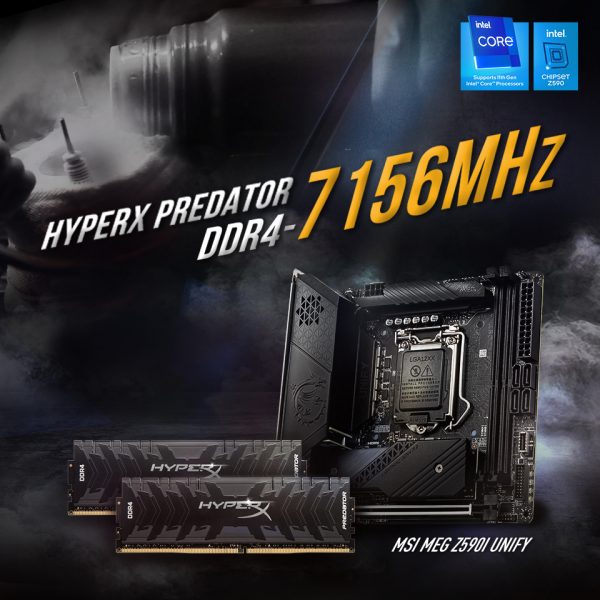 The record breaking overclock has been validated with CPU-Z and the entry can be found on HWBOT. As you would expect, the HyperX team is extremely pleased with this result, with the company's DRAM business manager, Lavanya Pudoru, saying: “We are extremely thrilled and humbled to be part of this exemplary DDR4 overclocking achievement. Our engineers work continuously to improve higher-speed memory yields to bring faster solutions by pushing boundaries that break performance records and bring best-in-class products to our gaming memory community.”

While you are unlikely to achieve an overclock this high at home using standard cooling methods, HyperX does sell a number of validated high-speed memory kits. The HyperX Predator DDR4 kit used here is available in speeds up to 4800MHz with latencies between CL12 and CL19. Single-dimm kits can be found in capacities of up to 32GB, if you get a kit with multiple dimms, you could install as much as 256GB of memory on a system.

All HyperX memory modules are Intel XMP-ready and ship with certified profiles for both the latest Intel and AMD chipsets.

KitGuru Says: Professional overclockers are in full swing at the moment following the launch of Intel's 11th Gen Core processors. 7.1GHz memory is one lofty achievement.