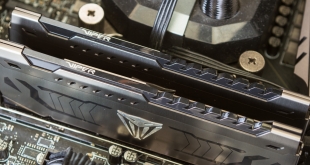 The memory frequency capabilities of AMD and Intel platforms have risen significantly with successive new platform and processor releases. Speeds in excess of 4,000MHz are now not uncommon with the right motherboard, a high-end CPU and little user effort.

Enter Patriot's Viper Steel DDR4 memory, registering in with frequencies of up to 4,400MHz using XMP profiles, it's now easier than ever before for enthusiasts to squeeze every last drop of performance out of their system. The Viper Steel series from Patriot spans 3,000 to 4,400MHz in 8GB or 16GB modules, though the faster frequencies are limited to 8GB modules. 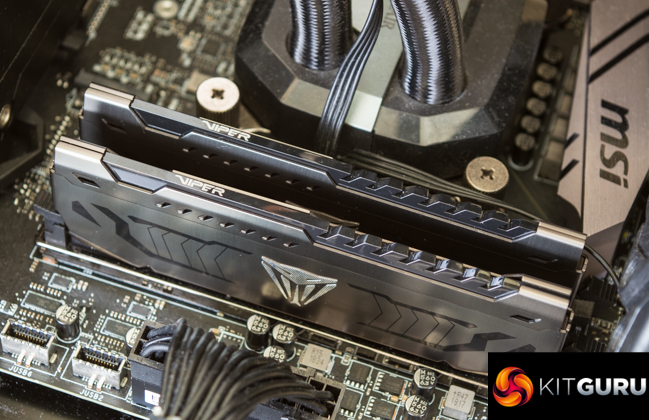 4,400MHz, the effective memory frequency of this review's test subject, is absurdly fast even by modern standards and still requires careful planning to get up and running without compatibility issues. Case in point is the fact testing failed to even get through the POST check above 4,000MHz on the ASRock Z390 Phantom Gaming X or EVGA Z390 FTW motherboards.

It wasn't until KitGuru revisited the excellent MSI Z390 MEG ACE motherboard that testing with the Patriot Viper Steel memory at 4,400MHz was even possible. Yet, MSI tentatively only lists compatibility with this specific memory kit (PVS416G440C9K) when running the second slower 4,266MHz profile, not the primary 4,400MHz profile. System stability at 4,400MHz was possible, but it wasn't exactly “plug and play” as it required some tweaking of voltages to achieve stability.

Anyone in the market for a memory kit this fast, 4,000MHz or higher, really ought to be checking through the memory compatibility list of prospective motherboard choices. 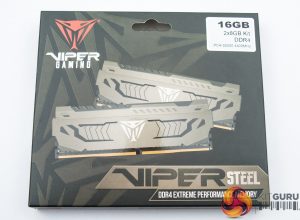 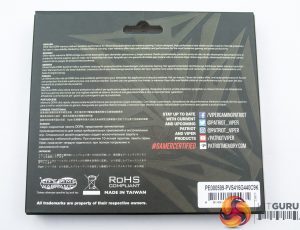 Patriot have kept the design of the Viper Steel simple, and that's something that will resonate with many buyers who are tired of the RGB fad that has swept across the industry. The packaging reflects that simplicity. 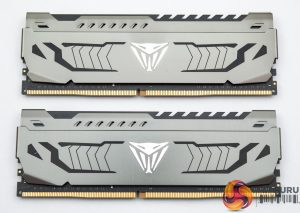 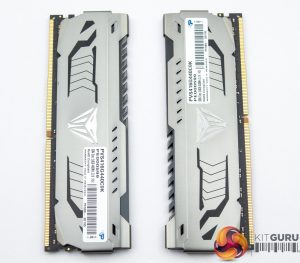 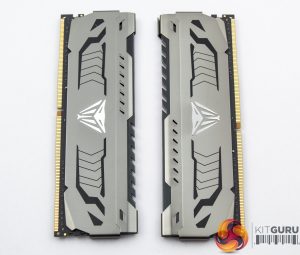 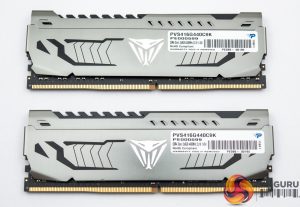 The Viper Steel DDR4 memory modules look the same in all frequencies and capacities, they use a silver aluminium heat-spreader (unfortunately, not steel) and have a matte-black PCB. Both sides of the module have stylistic patterns and cut-outs, and are embellished in the middle with the viper's head that is emblematic of the Patriot Viper Gaming brand.

RGB is omitted on this model which is reflected in the fact that the cost is more competitive (in the UK at least) than equivalent speed and capacity kits from rival brands such as Corsair and G.Skill. 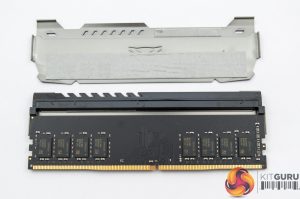 There is a thermal pad for some heat transfer between the memory ICs and the metal casing, but modern memory modules do not produce a great deal of heat even when pushed to the limit. That outer casing feels flimsy, even if it is metal, and after removing and replacing the modules into numerous motherboards for testing, the casing fell apart from the modules and had to be squeezed back together again. Not an excellent sign of build quality.

The height of the modules is 45mm, which is quite tall, so may be incompatible with some larger air CPU coolers. However, many system builders now have moved towards all-in-one liquid coolers which now dominate the high-performance CPU cooling market, so this shouldn't be an issue.

The memory ICs used are Samsung B-dies, the specific part number is “K4A8G085WB-BCPB” which has been used in a number of high-performance memory kits from big name memory brands.