While Z490 hit all the headlines in the enthusiast market, the lower-spec range of Intel 10th generation Comet Lake-S processors will no doubt find their way into more cost-effective motherboards such as the new H410 range recently announced by Biostar.

The Biostar H410 series of motherboards offering support for Intel 10th gen processors have been unveiled this week, with two new models aimed at business and casual users. Biostar claims the H410MHG and H410MH boards are manufactured from high-grade components and feature some impressive functions, suitable for all usage scenarios and built with reliability in mind.

Both boards are of the micro-ATX form factor and equipped with features such as USB 3.2 Gen 1 with transfer speeds of up to 5 Gbps and backwards compatibility with older USB specifications. Additionally, the H410 boards are also outfitted with PCIe M.2 storage slots with up to 10 Gb/s bandwidth and support up to 64 GB of DDR4 memory with speeds of up to 2933 MHz via two onboard DIMM slots. 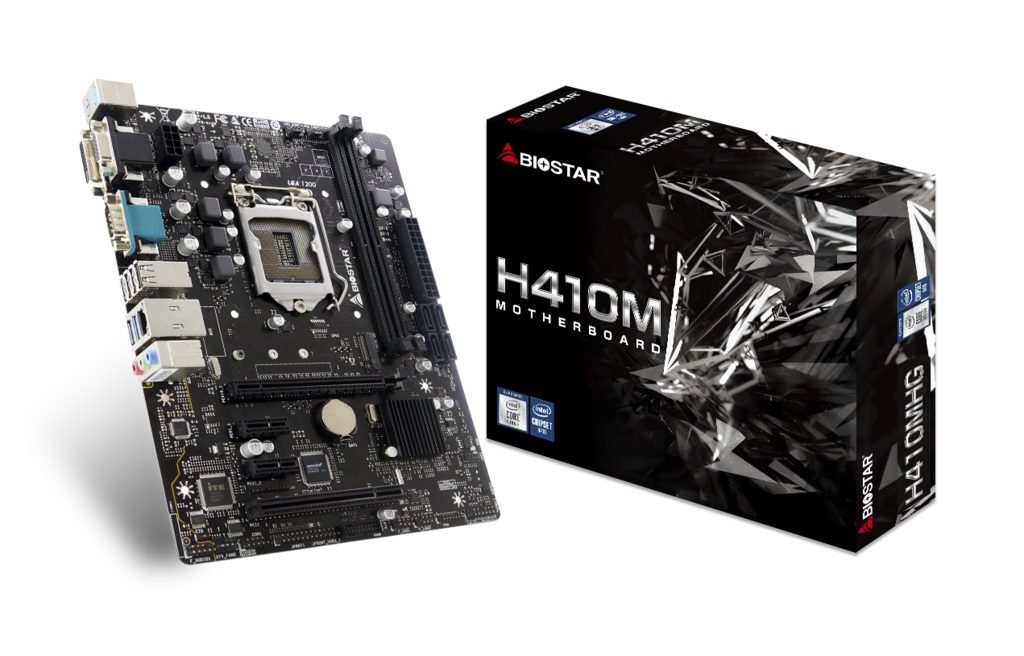 Biostar H410 motherboards also include GbE LAN and a comprehensive rear I/O panel that consists of two USB 3.2 (Gen1) ports, four USB 2.0 ports, one COM port, an HDMI port capable of outputting 4K resolution and ALC887 Audio with 7.1 channel HD Audio output via three audio jacks with the H410MHG. Rear I/O connectivity of the H410MH features much of the same but with a VGA output alongside the HDMI port.

The H410MHG and MH are outfitted with a single PCIe 3.0 X16 slot, two PCIe X1 slots onboard as well as four SATA III 6 Gb/s connectors on the MHG and two SATA III 6 Gb/s connectors on the MH variant. The H410MHG is also equipped with a single PCI port for legacy add-in cards and a TPM header towards the bottom of the motherboard.

Full details and specifications of the new H410MHG/MH motherboards can be found on the official Biostar pages, however, price and availability are yet to be announced.

KitGuru says: Any of you guys thinking of investing in 10th generation Intel CPUs that don’t require advanced features or overclocking functionality? If so, would you consider one of these H410 motherboards from Biostar?