Today is a big day for AMD, not only is the company coming out with its new seventh generation of APUs but it is also launching the new AM4 platform, bringing along support for DDR4, next generation I/O standards and of course, the upcoming Zen processors, which will be arriving early next year. 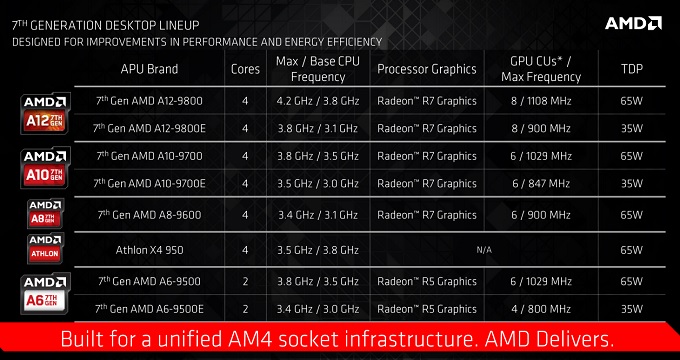 These new 7th generation APUs will be made available to OEMs to start off with. The highest end A12-9800 features four Excavator CPU cores clocked up to 4.2GHz and Radeon R7 graphics clocked at 1108MHz, all running at a 65W TDP. There is a more energy efficient version known as the A12-9800E which has a 35W TDP and lower CPU/GPU clocks. You can see the full range in the slide above.

These new chips will first show up in systems built by HP and Lenovo this year and according to AMD's own tests, its new APU shapes up quite well when pitted against an Intel Skylake Core i5, offering similar productivity performance and greatly improved graphics performance. 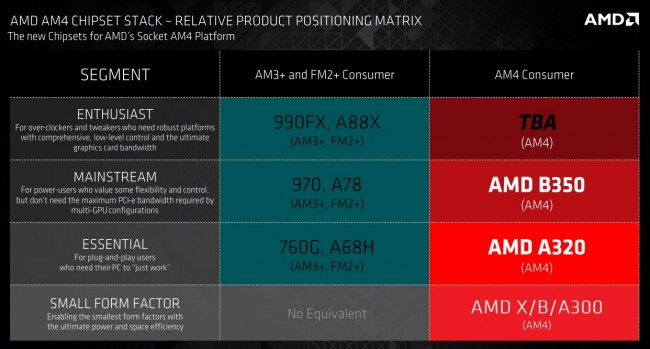 Aside from new APUs, AMD has updated its platform, introducing the AM4 socket, which was built with a unified infrastructure, providing compatibility for AMD's entire upcoming processor range, from the A-series to the upcoming Summit Ridge Zen processors. Key new features include DDR4 memory support, PCIe Gen 3, USB 3.1, support for NVMe and also SATA Express.

Right now, this launch applies to OEMs, so expect to see some new systems featuring AM4 and the new A-series start to pop up. A consumer launch has yet to be confirmed.

KitGuru Says: Hopefully it won't take too long for consumers to get their hands on these new APUs and new AM4 motherboards to pair with them. Are any of you currently running an APU-powered system? Are you thinking about upgrading to a newer platform?