MSI has officially released its new flagship motherboard based on the X99 chipset. The X99A Godlike Gaming motherboard takes on the familiar red and black colour scheme we are used to seeing on MSI's gaming products while also packing in plenty of features for enthusiasts to make use of. 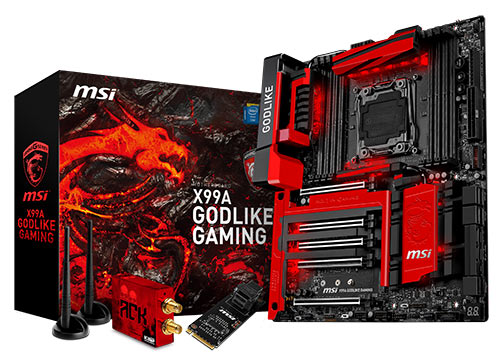 The X99A Godlike Gaming motherboard is the world's first to feature RGB LED lighting, with support for around 2000 different colours along with a few preset effects as we have seen on keyboards over the last year.

Killer DoubleShot-X3 Pro is a feature that combines the dual Ethernet connectors and the on-board WiFi together in order to bring higher LAN speeds. There is also a network manager that will control which applications run on which connection in order to optimize performance.

For overclockers, this motherboard also features MSI's turbo socket, which pushes things a bit further by adding in some extra pins, allowing for potentially higher overclocks and support for higher DDR4 RAM speeds.

KitGuru Says: The MSI X99A Godlike Gaming is a feature packed motherboard, that's for sure. Are any of you planning on building an X99 rig this year at all?

Previous Riot: League of Legends abuse down to just two per cent of games
Next Nvidia CEO touts ‘ping-pong’ strategy for Tegra system-on-chips