When it comes to single-board computers, the Raspberry Pi is the one that immediately springs to mind. About a year ago though, Gigabyte had a go at its own take with the GA-SBCAP3350. Now, a year later, Gigabyte is back with the GA-SBCAP3450, which is a notable step forward thanks to its quad-core CPU.

The GA-SBCAP3450 has officially appeared on Gigabyte's website and is listed with some very impressive specs. While the original Raspberry Pi rival featured a dual-core CPU, Gigabyte's latest and greatest packs an Intel Celeron N3450 quad-core chip that runs at up to 2.2GHz. Also included are two Mini-PCIe slots, dual gigabit LAN, internal Audio, USB headers and a single SO-DIMM slot for DDR3L RAM. It even has two SATA3 internal connectors to be taken advantage of. In terms of display outputs, it supports a maximum of 4K at 30Hz over HDMI. 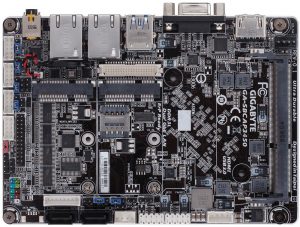 Unfortunately, the GA-SBCAP3450 is not an all in one package as buyers will need to source their own DDR3L RAM. On the plus side, you will be able to fit up to 8GB onboard.

There is no word on release date or pricing just yet, but since the listing has gone live, hopefully we'll hear a bit more soon.

KitGuru Says: These single-board PCs are always fascinating, but the community is just as vital as good hardware. This is why the Raspberry Pi is still relevant today. Are you interested in this new single-board computer from Gigabyte?