FSP is a name that KitGuru readers should recognise by now, particularly after their showing at Computex last year, featuring liquid cooled power supplies. At the time, we saw an early version of the FSP Hydro PTM+, a 1200W high-end power supply liquid cooled by a Bitspower block. Now this week, FSP has announced that this power supply is officially launching, meaning you’ll be able to get your hands on one.

Back at Computex 2017, we learned that the addition of a water block enabled FSP to squeeze out more wattage from its power supplies, turning a 1200W PSU into a 1400W one. The supply itself uses a DC to DC module design with Japanese capacitors for 92 percent efficiency. On the 80+ scale, this particular PSU carries a Platinum rating, so it sits right at the top of the pile. 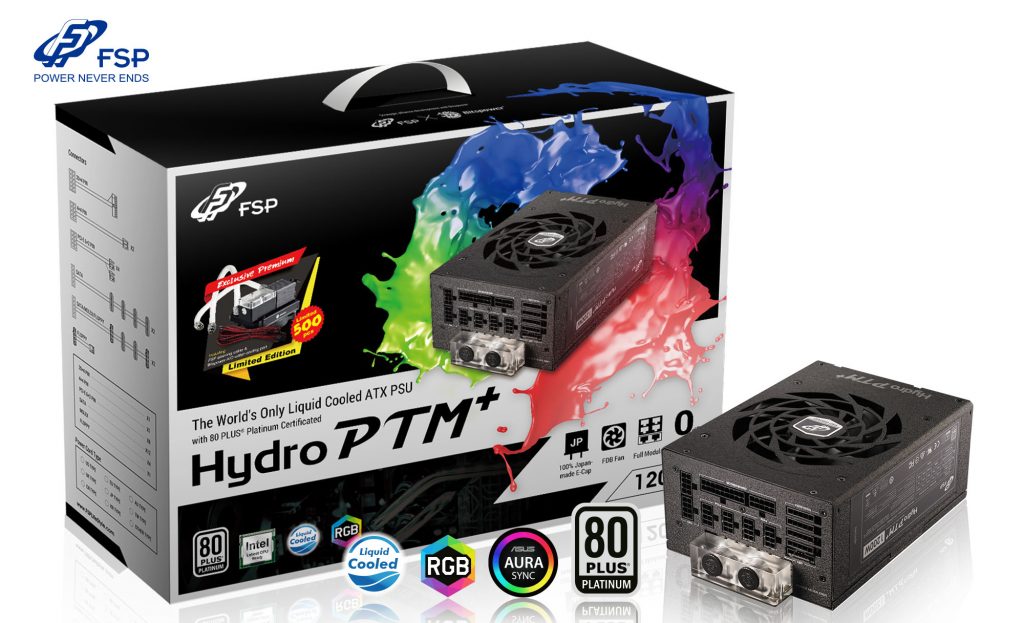 The Hydro PTM+ was developed in cooperation with Bitspower to create a unique liquid cooled power supply that excels at its efficiency, power rating, and thermal performance. With liquid cooling enabled, up to 1400W of power can be delivered, but when power demand is below 50% loading the Hydro PTM+ remains passively cooled, remaining completely silent. FSP wants to ensure that this particular PSU can suit any build too, so RGB lighting has been implemented with support for Asus Aura Sync. So if you’re using an Asus motherboard, graphics card, peripherals or a monitor, then you can have colours sync up nicely across all of it.

Obviously a liquid-cooled power supply sounds potentially dangerous at first, so FSP has implemented extra segregation to avoid leakages. If you happen to be a modding or liquid cooling enthusiast, then you’ll be pleased to know that the first 500 Hydro+ units on the market will ship with some extras, including sleeved cables and a Bitspower AIO liquid cooling kit, including a pump, radiator and a 120mm fan. You’ll need to source your own coolant though.

The FSP Hydro PTM+ liquid-cooled power supply will be hitting retailers soon. The 1200W model has an MSRP of $699.

KitGuru Says: It might be very expensive, but it’s also not often that we see an established PSU maker selling liquid-cooled units. It will be interesting to see one of these in person, hopefully we’ll be able to get our hands on a review unit at some point in the future.