SanDisk Corp. on Tuesday introduced its new Extreme Pro family of solid-state drives designed for gamers, PC enthusiasts and media professionals. The new drives offer unbeatable performance on par with other high-end SSDs as well as a 10-year warranty, an unprecedented thing for consumer-class solid-state drives.

SanDisk Extreme Pro SSDs are set to be available later this month in 240GB, 480GB and 960GB capacities. The drives use the Serial ATA-6Gb/s interface an provide up to 550MB/s read performance and up to 520MB/s write performance. The manufacturer said that its new drives feature the nCache Pro technology that utilises a two-tiered caching architecture to optimise speed and endurance for heavy workloads, efficient multi-tasking. The nCache should also ensure that performance of the SSDs will remain high after years of usage without any risks of losing data. 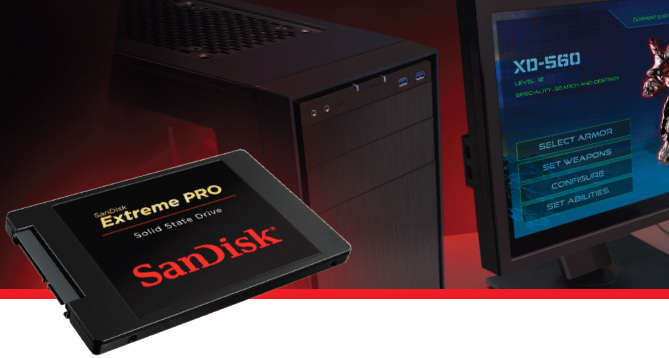 While the company does not reveal a lot of technical details in general, it is logical to assume that the new Extreme Pro drives are based on the second-generation 19nm MLC NAND flash memory with toggle/DDR interface produced by Toshiba and SanDisk.

The Extreme PRO offers an industry-leading 10-year warranty across the world, which indicates that SanDisk is confident about the quality and performance of its new drives.

KitGuru Says: A 10-year warranty on a consumer SSD? Wow! SanDisk definitely deserves a praise here! Still, keeping in mind that SSD makers nowadays have to differentiate themselves somehow, long warranties will likely be available from other makers as well.