Western Digital on Tuesday demonstrated the industry’s first solid-state hybrid drives (SSHDs) with the SATA Express interface (SATAe) at the Computex trade-show in Taipei, Taiwan. The new drives are not going to show up on the market for some time, but it looks like WD is ready to adopt the new interconnection technology.

At the Computex WD demonstrated prototypes of its hybrid drive that combine a 4TB hard disk drive along with a 128GB solid-state drive in one 3.5” package. The devices use the Serial ATA Express interface, but Western Digital remains tight-lipped about other specifications of the WD Black prototypes and its SATAe-related commercial plans.

“WD has been at the forefront of SATA technology, and we see a vibrant growth path for adoption of the future SATA Express Roadmap,” said Matt Rutledge, senior vice president of storage technology at WD. “SATA will remain a standard for many years in many applications, and for customers who want to discuss a future beyond vanilla SATA, WD is ready to plan the future with them. 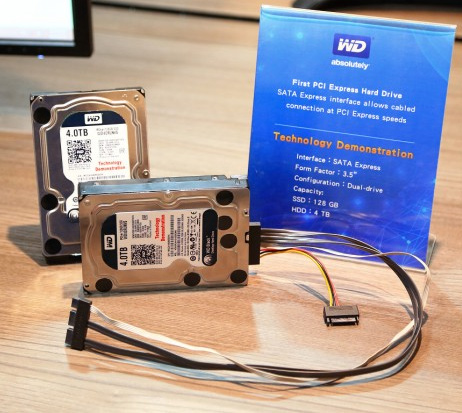 While modern hard disk drives are considerably faster compared to HDDs a decade ago, they, unlike solid-state drives, greatly underutilize modern storage interfaces, such as the Serial ATA-6Gb/s. The majority of consumer hard drives cannot read or write data at rates faster than 200MB/s, hence, they do not even need the current-gen interface. In fact, it is highly likely that the SSHD that was on the display at Computex 2014 also does not fully take advantage of the SATAe’s 1GB/s maximum bandwidth.

KitGuru Says: It will be interesting to see how long it will take the SATA Express to leave behind traditional SATA in terms of market share. Hard disk drives will not benefit from the SATAe’s bandwidth anytime soon, but solid-state drives could take advantage of the technology even now. Since HDDs are not going anywhere, it looks like SATA is going to stay on the market for many years to come.

Previous Overclocker teams up with Gigabyte, Kingston to push DDR3 to 4.50GHz
Next SanDisk unveils consumer SSDs with up to 960GB capacity, 10 year warranty