SK hynix likes to bring out products based on new technologies – whether it be SSDs or memory. The South Korean company has now announced the availability of the PE8000 series, an SSD line aimed for datacenter costumers.

To re-iterate, the products are aimed for ‘professional' costumers, specifically those who run a datacenter. However, the new SSDs introduces new technologies to the market that should be of interest for everyone. Two of the products from the series – PE8010 and PE8030 – “are the Company’s first Non-Volatile Memory express (NVMe) SSDs supporting the PCIe Gen4 Interface”.

Both PE8010 and PE8030 features “96-layer Triple-Level Cell (TLC) 4D NAND flash” with a maximum capacity of 8 TB. PE8010 is designed to work well with “read-intensive workloads”, while PE8030 is “optimized for mixed-use”. However, perhaps the most impressive feature of the SSDs is their speed in relation to their power consumption. 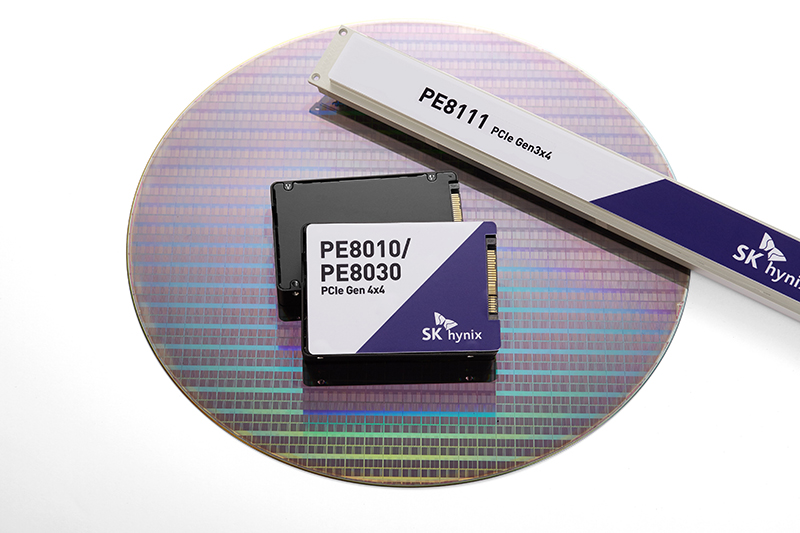 SK hynix says that PE8010 and PE8030 have the “strongest performance among low-power PCIe Gen4 SSDs in the market”. The numbers given by the semiconductor supplier for both SSDs are “sequential read speeds of up to 6,500MB/s and sequential write speeds of up to 3,700MB/s, with random read and write of up to 1,100K and 320K Input/output operations per second (IOPs)”.

To gain some perspective on how fast the new SSDs are, SK hynix compares the new drives to its previous-gen models released in 2019 – saying that the new SSDs have 103% faster sequential reads and 357% faster random writes. This is all accomplished while keeping a maximum power consumption of 17W.

Samil Kim, head of the eSSD business at SK hynix, stated “We will reinforce our technology leadership through the mass production of our PCIe Gen4 products in the second half of this year, and also provide eSSDs with high performance and reliability to our hyperscaler and enterprise OEM customers.”

The full press release can be found HERE.

KitGuru says: Even though the new SSDs are aimed for datacenters, they show what can be expected for the consumer market in the not too distant future. When do you think we can see something similar for regular costumers?

Previous Samsung 3nm production expected to be delayed to 2022
Next The Japanese ratings board will close for the next month, causing potential game delays