The PCIe 4.0 generation of SSDs kicked off two years ago, with the first drives delivering speeds up to 5000MB/s. Now with the technology maturing, faster PCIe 4.0 SSDs are starting to hit the market, with the latest from KLEVV delivering up to 7000MB/s read speeds.

This week, KLEVV, a new memory brand introduced by Essencore, is launching two new M.2 NVMe SSDs. The CRAS C920 is KLEVV's first PCIe 4.0 SSD, boasting random read and write speeds up to 7000MB/s and 6850MB/s respectively, making this one of the fastest SSDs around. You'll have plenty of space too, as this SSD will ship with 1TB and 2TB capacities. 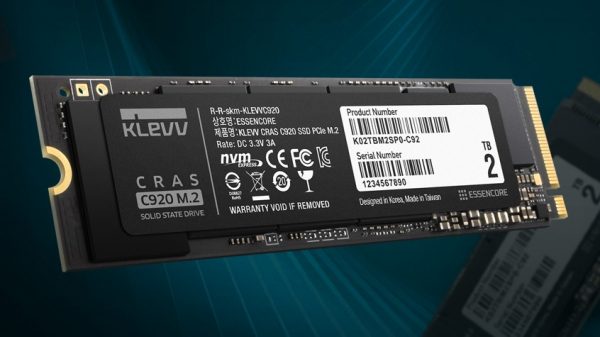 The second new SSD from KLEVV is none other than the CRAS C720, an upgrade over the company's previous PCIe 3.0 M.2 NVMe SSD. The CRAS C720 is designed to be smart and affordable, offering random read and write speeds up to  3400MB/s and 3100MB/s respectively. This particular drive will be available in capacities from 256GB all the way up to 2TB to suit different needs.

Of course, both of these SSDs pack KLEVV's smart feature set, including intelligent SLC caching to optimise performance, monitoring tools to ensure the SSD does not overheat, data integrity and SRAM error handling and more. These SSDs are also backed by a five-year limited warranty and include a copy of Acronis True Image HD 2018 for full drive back ups and data migration.

KitGuru Says: Are any of you looking to make the jump to a faster PCIe 4.0 SSD this year?

Previous The Legend of Zelda: Breath of the Wild 2 is releasing next year
Next Samsung starts mass production of LPDDR5 Multichip Package memory