We've been following Patriot's VIPER GAMING series of SSDs for a while now and this week, the new VPR100 M.2 SSD was added to the roster, bringing a dash of RGB colour to the lineup. This is a PCIe Gen 3 SSD, coming in capacities all the way up to 2TB.

Powered by the Phison E12 series controller, the VPR100 M.2 NVMe SSD offers sequential read speeds of 3300MB/s and sequential write speeds of up to 2900MB/s depending on the model. There are RGB LEDs over the chassis, which is fully compatible with ASUS Aura Sync, MSI Mystic Light, ASRock Polychrome and Gigabyte RGB Fusion for syncing up with the rest of your system. 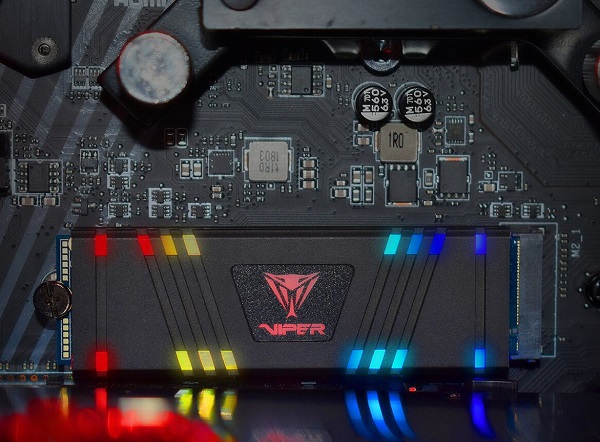 The drive provides 4K random-read IOPs up to 700K and random-write IOPs up to 650K on the 1TB/2TB model for exceptional throughput. Performance is enhanced thanks to the structure of the Intelligent SLC (Single Level Cell) caching algorithm, ensuring that data is handled quick and efficient.

The VPR100 is also built on a 10-layer PCB for better stability and signal integration. An external thermal sensor is also included to monitor temperatures better and reduce the risk of the drive overheating or suffering performance degradation.

Currently, all pricing is in USD but once we get an update on UK/EU availability, we will update with additional information.

KitGuru Says: Are any of you in the market for a new M.2 SSD upgrade? What do you think of the latest Viper series?