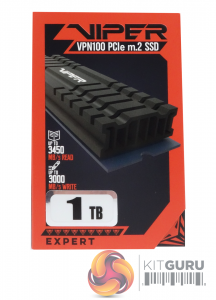 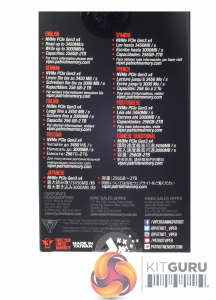 The VPN100 comes in a compact, well-constructed box. On the front is an image of the drive along with Sequential read and write figures, as well as a sticker showing which capacity drive is in the box. The rear of the box is covered with multi-lingual points about the drive’s performance and available capacities. 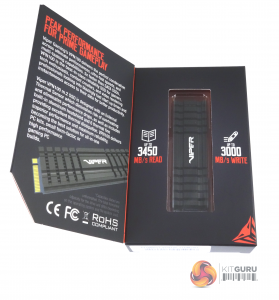 The front of the box is in fact a lid which, when opened, allows the drive to be viewed behind a clear plastic window. The underside of the lid displays more information about the drive and its uses, along with another large image of the drive.

The VPN100 1TB drive is a dual sided design. The front of the drive is covered by an impressive looking, large passive heatsink. Sitting under the heatsink is the Phison PS5012-E12 controller along with two 256GB packages of Toshiba 3D TLC NAND (labelled TABBG55AIV) and a 512GB SK hynix H5AN4G8NBJA DDR4 DRAM cache IC.

The rear of the PCB is pretty much covered by a white product sticker. Under the product labels are two more 256GB NAND packages and another 512GB SK hynix H5AN4G8NBJA cache chip to give 1GB of total cache. 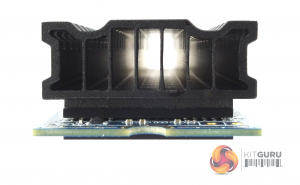 The large aluminium heatsink features six internal vertical fins which, together with an external thermal sensor, ensure that the drive is working at peak performance. 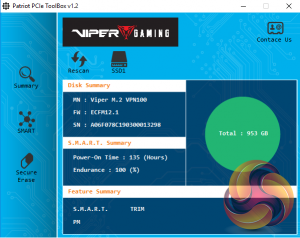 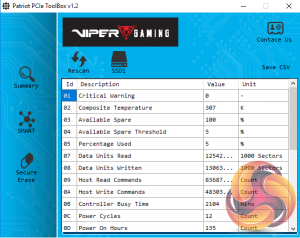 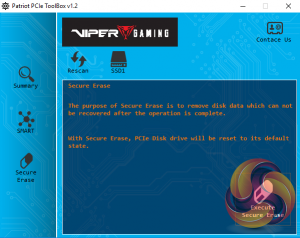 Patriot’s SSD management software, the Patriot PCIe Tool Box (v1.2) looks a pretty basic utility compared to some of its competitors offerings but it really does offer all you really need to keep an eye on your drive.

It shows information on firmware version, serial number, total capacity, endurance, power-on time, if TRIM is enabled ,and SMART data. It also allows the secure erase of the drive. The one thing missing from the current version (v1.2) is an option to update the drive’s firmware.